Tomorrow's labmeeting will be one hour later than usual, at 11.00, because there is an interesting talk by Niels Dingemanse from the Max Planck Institute for Ornithology in the limnology group at 10.00. Niels is one of the leading researchers on the theme of animal personality, and his talk is likely to be interesting for anyone working on the evolution of behaviour. Here is a link to his website.
Written by Machteld kl. 1:49 AM 0 kommentarer

Can phylogenetic methods from evolutionary biology inform us about how societies evolve?

This coming lab-meeting (Wednesday 27 October), I was thinking that we should discuss if and how methods from evolutionary biology can elucidate problems studied by political scientists: the rise and fall of societies. There is an interesting article published in Nature, where the authors used phylogenetic methods to investigate if societies evolved towards more complexity (or not). The study was performed on a set of societies in South-East Asia and in the Pacific.

Evolutionary biologist and community ecologist Jared Diamond has an interesting perspective about the study. Read both the comment by Diamond and the original article so that we can have an interesting discussion on Wednesday. Time and place as usual: "Darwin" at 10.15. Below is the abstract and title of the original paper:

There is disagreement about whether human political evolution has proceeded through a sequence of incremental increases in complexity, or whether larger, non-sequential increases have occurred. The extent to which societies have decreased in complexity is also unclear. These debates have continued largely in the absence of rigorous, quantitative tests. We evaluated six competing models of political evolution in Austronesian-speaking societies using phylogenetic methods. Here we show that in the best-fitting model political complexity rises and falls in a sequence of small steps. This is closely followed by another model in which increases are sequential but decreases can be either sequential or in bigger drops. The results indicate that large, non-sequential jumps in political complexity have not occurred during the evolutionary history of these societies. This suggests that, despite the numerous contingent pathways of human history, there are regularities in cultural evolution that can be detected using computational phylogenetic methods.
Written by Unknown kl. 12:40 PM 0 kommentarer

Remembering the summer: field work with damselflies in Skåne

Winter is approaching fast, and what could be better then than to try to remember the past beatiful summer for as long as possible?Varm summers means field work with insects, at least for some of us. This was also the case for myself, CAnMove postdoc Sophia Engel and a number of other students and postdocs working with field studies of calopterygid damselflies. Here is a nice movie about CAnMove-related field work from Lund University's Youtube-channel. This movie contains an interview with Sophia and myself, where we explain what kind of experiments we did, and why. Unfortunately, this movie is in Swedish, not English, but at least you can enjoy the pictures!

Basically, we have quantified flight speeds of individually marked damselflies of two species (Calopteryx virgo and C. splendens), and we relate this performance-trait to wing morphology (shape), longevity in the field and mating success (sexual selection). A key player in this system is an enigmatic avian predator which kills these insects: The white wagtail (Motacilla alba), which also appears in the movie. The ornithologists among you readers will hopefully also realise how fascinating this insect system actually is, since it obviously also involves a bird! A key goal of ours is to link morphology to performance and fitness, and combine flight speed estimates with data on morphology and fitness. Such studies are rarely possible to perform, particularly not in natural populations of insects, so we are quite excited about the results that will hopefully come out from this work.

If the movie above does not work, you could follow this link instead. Enjoy! And go back and watch this movie whenever you miss the summer...
Written by Unknown kl. 10:55 AM 1 kommentarer 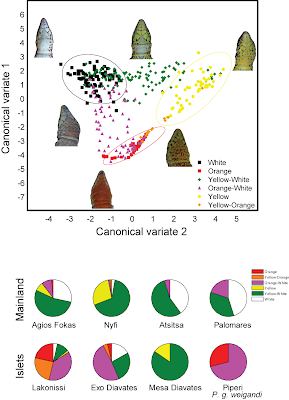 We have recently published a paper on evolutionary processes in isolated islet populations of the Skyros wall lizard, Podarcis gaigeae in BMC Evolutionary Biology. The paper investigates the relationship between neutral genetic divergence and morphological divergence in islet- and mainland populations. The morphological trait we use in the comparisons is throat colour morph, and islet populations show pronounced frequency differences with different morphs being common on different islets. Our data suggests that stochastic forces such as genetic drift and/or founder effects can interact with selection and have an effect even at a morphological level in islet populations with low effective sample sizes. BMC Evolutionary Biology is an open access journal and a link to the paper is found here. The abstract is as follows:

Background
Patterns of spatial variation in discrete phenotypic traits can be used to draw inferences about the adaptive significance of traits and evolutionary processes, especially when compared to patterns of neutral genetic variation. Population divergence in adaptive traits such as color morphs can be influenced by both local ecology and stochastic factors such as genetic drift or founder events. Here, we use quantitative color measurements of males and females of Skyros wall lizard, Podarcis gaigeae, to demonstrate that this species is polymorphic with respect to throat color, and the morphs form discrete phenotypic clusters with limited overlap between categories. We use divergence in throat color morph frequencies and compare that to neutral genetic variation to infer the evolutionary processes acting on islet- and mainland populations.
Results

Lab-meeting about intralocus sexual conflict and seminar by Jessica Abbott

This week's lab-meeting has been moved to Thursday morning (10.00-12.00) and to the seminar room "Fagus" (third floor above "Darwin"), due to the seminar by outside visitor and former lab-member Jessica Abbott in the same day, in the afternoon (14.00, "Blue Hall").

The theme of Jessica's talk will be intralocus sexual conflict and genetic constraints, and that will also be the theme of our lab-meeting. I was thinking that we should discuss a recent review by Jessica in Proc. R. Soc. Lond. B. about how one can study intralocus sexual conflict in hermaphroditic animals. Hopefully, Jessica will arrive in time to comment on this paper as well, her expected arrival time to the Department is about 11.00.

Before we discuss Jessica's interesting review-paper, we will discuss a manuscript that I and Fabrice Eroukhmanoff have written about population variation in intersexual genetic correlations and sexual dimorphism in aquatic isopods (Asellus aquaticus). We have worked on this manuscript for quite a while and we would be interested in getting some input. The results have clear links to the research topic and interests by Jessica. We will send you out this manuscript in a separate e-mail, hopefully today (Monday). Send me an e-mail if you do not get it (erik.svensson@zooekol.lu.se).

After our lab-meeting in "Fagus", there will be opportunity to go for lunch with Jessica, and at 14.00 her seminar starts in the "Blue Hall" in the Ecology Building, entitled:

You can read more about Jessica's research here, and here you can find a list of past and more recent publications.
Written by Unknown kl. 1:00 AM 0 kommentarer

On Wednesday, our lab-meeting will start one hour later, at 11.15, as there is an interesting seminar that starts at 10.00 in the Limnology Section's seminar room "Tanken" (first floor). The talk will be given by Dr. Martin Lind, former PhD-student in Umeå in the laboratory of Frank Johansson, and currently a VR-postdoc at Sheffield University (UK). The title of Martins talk is:

After the seminar, we walk back to the 2nd floor, and start  our regular lab-meeting at 11.15, i. e. one hour later than usual. This lab-meeting will take place in "Darwin", as has previously been announced. Hopefully, Martin will join us and provide some input on the papers. We will discuss one paper on niche conservatism in North American Jays, and one manuscript of ours that has already been sent out by Maren Wellenreuther. Send Maren an e-mail if you have not yet received this manuscript (maren.wellenreuther@zooekol.lu.se).
Written by Unknown kl. 2:44 AM 0 kommentarer

A quick update from here down under at the ISBE conference. Today is the last day, and so there is only one more session is to come and the Hamilton lecture, which will be held by Nick Davies this time, one of my personal heroes in the field of behavioral biology. Looking forward! Also, I’m pleased to inform you that Thomas Gosden and I gave a talk in the same session yesterday afternoon. Tom gave an excellent presentation of his ongoing work, to a very enthusiastic audience. I think my talk was well received as well, though that is of course up to the audience to judge, but at least there were plenty questions. (Tom said I did a good job ;) ).

I’ve been looking for an emerging theme at this edition of the ESEB, as in previous years conferences were often overwhelmingly about one subject ( a few years ago it was multiple sexual traits), but I am not sure there is one this year. If anything, it might be the question of why females mate multiply, from the particular angle of genetic compatibility. Also Nina Wedell’s plenary lecture was of course along that theme. I am looking forward to hearing her speak again when she is coming to Lund! Marianne Wolfner also had a very interesting presentation about interactions at the molecular level between male and female proteins in fertilization. Also personalities has been pretty prominent, like the previous ISBE.

It’s been a lot of fun, lots of varieties of talks available, though Tom missed quite a few of them since he had to write his talk (yes, the data were that fresh of the press).

We’re both looking forward to some travel afterwards. Tom is driving up western Australia, and I’m going to explore the jungle in Borneo! Our life sucks badly, you guys enjoy your Swedish October…

Written by Machteld kl. 1:15 AM 1 kommentarer