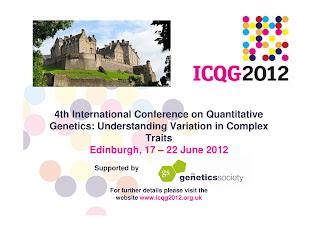 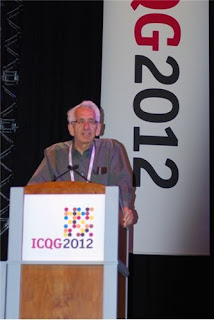 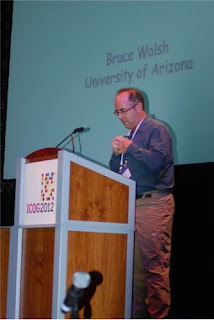 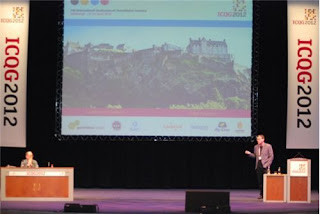 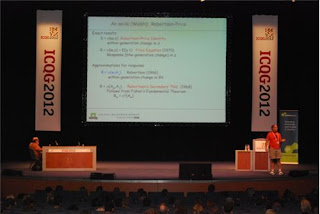 Last month the beautiful city of Edinburgh hosted the 4th International Conference on Quantitative Genetics. Over 600 delegates were registered to attend from over 50 countries (including several from Sweden), listening to talks by people working on complex traits in human health and disease, agriculture, natural populations and evolution.

Despite spending the week feeling intellectually inadequate, the conference was excellent and attended by many of the who’s who in quantitative genetics. The program was single session, meaning I saw a number of talks I wouldn’t have normally seen. There were several excellent talks, covering a wide range of different quantitative genetic approaches, including incorporating new molecular techniques such as GWAS. One minor complaint would be that several talks seemed to simply show variation in complex traits using (mind blowingly) huge sample sizes in GWAS studies, without any obvious underlying questions behind the research. However, this could simply be me missing the point, or not understanding different research approaches.

Jarrod Hadfield’s talk entitled “What, me natural? Patterns of selection in wild systems and their theoretical implications” would also have interested many of you here, as it addressed the question of variation in selection in natural populations, mentioned by Erik in his last post. Being a quantitative genetics conference, the talk was more focused on this side of the discussion, rather than the potential ecological drivers Erik mentioned below. The talk was also mainly focused on long-term studies of wild populations with pedigree data, such as the Soay sheep populations on St Kilda. He discussed the disparity between the estimates of directional selection in the wild, and associated lack of response. I found his discussion regarding the confounding statistical problems that come from tackling such issues, and the associated problems in such famous datasets as the Soay sheep, fascinating and a little disheartening.  It certainly backs up Erik’s argument that the answers to many of the big questions in evolutionary biology are not to be found in one discipline or using one approach.

Finally, I’d like to mention a talk given by Bruce Walsh on “The consequences of indirect genetic effects for heritable variation and response to selection”. Bruce was standing in for Piter Bijma, who had to leave the conference early and was unable to give his talk. Bruce presented Piter’s slides, giving his own version of the talk. It was an outstanding presentation and I wish I could get him to give all my future talks. It left me feeling quite inadequate, but that is something my therapist and I will have to deal with.

It was certainly an enjoyable conference and gave me the chance to meet many excellent scientists, which resulted in some great chats over some lovely single malt whisky. I am always astounded how many issues can be solved after a few glasses of scotch, if only I could remember what was decided. (all pictures are taken from the ICQG site)

I just returned from a three-day working group meeting at "National Evolutionary Synthesis Centre" (NESCent) in Durham (North Carolina). The working group's topic is "Environmental and demographic determinants of natural selection", and there were 18 participants from the Australia, Canada, Sweden, the US and UK, i. e. a very multantional and scientifically diverse crowd, some of which you see on the pictures above and who you might recognize already. The organizers of this working group are Andrew MacColl, Adam Siepielski, Stephanie Carlson and Tim Coulson, four colleagues whose work I did know very well since before, but this was actually the first time we met IRL.

This working group will perform a meta-analysis and litterature synthesis on a favourite topic of mine: the ecological causes of natural and sexual selection on phenotypic traits in natural populations. I have been interested in this topic since my postdoc, especially the role of density-dependent natural selection on egg size, but also in later years when Tom Gosden and I studied spatial variation in sexual selection and its ecological consequences in the damselfly Ischnura elegans.

In spite of several decades of excellent selection studies in natural populations (summarized in a large meta-analysis ten years ago by Joel Kingsolver and colleagues), our knowledge about ecological agents (predators? competitors? parasites? climate?) are still very limited and far from quantitative. This is unfortunate, as natural selection is an ecological process, that might (or might not!) lead to evolutionary change. In fact, and to cite the great population geneticist Ronald Fisher in the famous opening sentence of his landmark volume The Genetical Theory of Natural Selection (published in 1930): "Natural selection is not evolution". Natural selection might lead to evolution - if the traits under selection are heritable and some other conditions are met - but need not to do so, and frequently does not.

In this working group, we will search the litterature and add to already existing databases information about selective agents to those published studies where selection on phenotypic traits have been quantified already. Questions that can then be adressed include: How much of the variation in selection gradients can be explained by various environmental factors? What is the role of climatic factors and other abiotic factors vs. biotic factors like predation, competition, food supply or parasites? Do abiotic factors like climate and biotic factors interact - and could they even reinforce each other? We take up the challenge put forward by Michael Wade and Susan Kalisz in their important conceptual paper "The causes of natural selection" from 1990.

The questions are endless - and we know very little about the answers, but they are likely to be important. It is interesting that there is so much to do in this field and in the study of the ecology of selection in the "postgenomic" era, when we realize that the molecular revolution did not, and will not, solve all problems in evolutionary biology, and certainly not these ecological questions about the nature of selection on quantitative traits (whose genetic background is often due to many loci of small effects, resulting in the "missing heritability" problem).

The radical conclusion remains however: we do not need to know anything about neither quantative genetics or molecular genetics to study the ecological causes of selection - as this a question at an entirely different level of organization and  the ecological process of selection does not have anything to do with genetics, as so elegantly clarified and formalized by Lande and Arnold in their classical 1983-paper.

I am happy to have the opportunity to participate in a working group like this, and also impressed by a facility as NESCent - where synthetic work of this kind is funded - to the benefit of not only US scientists but also scientists from other countries. Hopefully, this working group will find some interesting new patterns and move the field forward - and perhaps help us to improve the empirical study of selection. I have already learned a lot - and hope to learn even more in the future. And that, after all, is the goal of science, not only publishing papers - which is of course also nice - but which is only one way of many others to communicate science. This blog post has hopefully also inspired and informed somewhat in that respect.
Written by Unknown kl. 4:30 PM 0 kommentarer

This year, the following nationalities were represented: Canada, Denmark, France, Japan, Netherlands, Scottland, South Africa, Sweden and USA. It was also the first time that we saw rice on the barbecue (brought by Yuma Takahashi).

Yuma also showed his talent in the traditional Swedish game "Kubb" afterwards. Thanks to everyone who came and contributed to the wonderful evening, when Sweden showed its best side (in terms of weather at least). And very welcome next year in June again!