The toucan bill as a thermal radiator: adaptation or exaptation?

Have you ever visited a rainforest in the New World, such as in Costa Rica or elsewhere in Latin America? If so, it is a great chance you have seen a toucan, those big fruit eating birds with HUGE bills (see picture above).

The function of such large bills has been quite unknown, but now a new study published in Science indicates a surprising novel function: the bill might be important as thermal radiator (bottom figure). Using a thermal image camera of similar kind as we have bought to our lab, the researchers were able to demonstrate that the many blood vessels in the bill helped to quickly cool down the bird and get rid of excess heat. The birds could actually cool down by ten degrees in only a few minutes (yellow areas are high temperature areas in the bottom picture).

This study is interesting for several reasons. First, it shows how new techniques can help to answer old questions and give new answers (sometimes quite surprising, as in this case). Second, it shows that one has to have an open mind when trying to understand the adaptive functions of traits and what traits are "for". Most people, including myself, probably thinks that the bill evolved "for" the specific purpose of efficiently picking fruit. This might very well be the case, but once the bill have reached a certain size, it can also secondarily get another function in the form of a thermoregulator.

In this context, perhaps the thermoregulatory function is simply an exaptation, i. e. not a true adaptation in the language of paleontologist Stephen Jay Gould? Or perhaps the bill was further exaggerated once it had reached its "optimum" size from the perspective of fruit picking, and only the extra length is a true adaptation in the context of thermoregulation? Perhaps future phylogenetic comparative studies involving other toucan species with different bill sizes and the thermal image camera can provide some answers to these fascinating questions?

(Thanx Maren for the tip!)
Written by Unknown kl. 4:41 AM 2 kommentarer

Update from the Ischnura field season 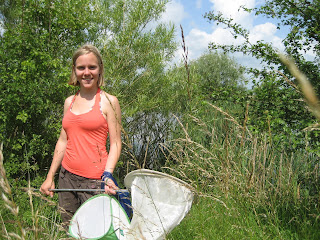 The damselflies are certainly happy this summer.  Anna Norden (see pic at right) and I have found ourselves with plenty of specimens from our surrounding Skåne populations, especially with the recent sunshine.  The Swedish sun has even managed to give us slight sunburns today.
The new IR camera is up and running in the lab.  We are taking pictures of both Ischnura elegans and Colopteryx sp. under cold and hot treatments.  We are refining the experimental setup and hope to keep adding more dimensions to the study.  IR imaging is quick and easy and seems to have endless potential.
Along with IR we are continuing wing analyses, behavioral and fitness studies, and population surveys of I. elegans.  If conditions stay hot and sunny we hope to continue wandering Skåne catching damselflies well into August. 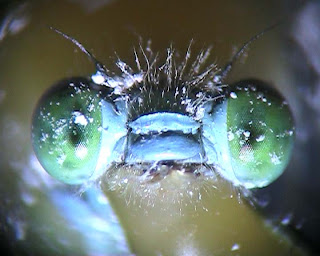 This season we have begun collaborating with the Lund Vision Group who are keen on deciphering the Ischnura vision system.  Almut Kelber and Miriam Henze are using the polymorphic damselfly system to investigate how male vision relates to the spectral variation of the female color
morphs.  Pairing vision with signal, they are investigating both sides of the interaction by measuring male spectral sensitivity and visual acuity (see pic at left), while quantifying the reflectance and structure of female color.  We look forward to their results from this first season!
We are also keen on getting volunteers out in the field with us.  We have had a few super enthusiastic students come out and to learn about the damselfly system and we look forward to having more.
Written by lisafeets kl. 3:47 PM 0 kommentarer

On isopod antipredator adaptations in PLoS ONE

This week, Fabrice Eroukhmanoff and I have a paper about antipredator adaptations and phenotypic integration in the famous aquatic isopod (Asells aquaticus), the main study organism in Fabrice's Ph.D.-thesis work. The paper is published in the popular and fast growing "Open Acess"-journal PLoS ONE, which despite some initial skepticism, has rapidly emerged as a major scientific publisher.

I would encourage you to read this paper and if you have time and have registered as a user at PLoS, feell free to comment upon it. This is one of the major strength of publishing in PLoS-journals: the interactivity between readers and published articles.

Here is the abstract for those who are interested:

"It is increasingly being recognized that predation can be a strong diversifying agent promoting ecological divergence. Adaptations against different predatory regimes can emerge over short periods of time and include many different traits. We studied antipredator adaptations in two ecotypes of an isopod (Asellus aquaticus) that have, diverged in parallel in two Swedish lakes over the last two decades. We quantified differences in escape speed, morphology and behavior for isopods from different ecotypes present in these lakes. Isopods from the source habitat (reed) coexist with mainly invertebrate predators. They are more stream-profiled and have higher escape speeds than isopods in the newly colonized stonewort habitat, which has higher density of fish predators. Stonewort isopods also show more cautious behaviors and had higher levels of phenotypic integration between coloration and morphological traits than the reed isopods. Colonization of a novel habitat with a different predation regime has thus strengthened the correlations between pigmentation and morphology and weakened escape performance. The strong signature of parallelism for these phenotypic traits indicates that divergence is likely to be adaptive and is likely to have been driven by differences in predatory regimes. Furthermore, our results indicate that physical performance, behavior and morphology can change rapidly and in concert as new habitats are colonized."