Something to read during the summer? 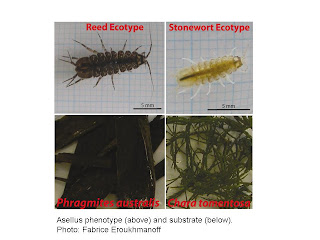 I know many of you are probably enjoying your vacations right now, but given the bad weather Europe is experiencing at the moment, I thought I could suggest a couple of papers that might eb of interest to you during a rainy day...


First, Erik, Anders and I recently published the last two "isopod" papers included in my thesis, one dealing with reproductive barriers and adaptive divergence, mainly assessing the role and importance of assortative mating and migration modification during ecotype divergence in aquatic isopods:

ABSTRACT: The question of how diverging populations become separate species by restraining gene flow is a central issue in evolutionary biology. Assortative mating might emerge early during adaptive divergence, but the role of other types of reproductive barriers such as migration modification have recently received increased attention. We demonstrate that two recently diverged ecotypes of a freshwater isopod (Asellus aquaticus) have rapidly developed premating isolation, and this isolation barrier has emerged independently and in parallel in two south Swedish lakes. This is consistent with ecological speciation theory, which predicts that reproductive isolation arises as a byproduct of ecological divergence. We also find that in one of these lakes, habitat choice acts as the main barrier to gene flow. These observations and experimental results suggest that migration modification might be as important as assortative mating in the early stages of ecological speciation. Simulations suggest that the joint action of these two isolating barriers is likely to greatly facilitate adaptive divergence, compared to if each barrier was acting alone.

and the other one involving the role of genetic constraints and genetic variation in adaptation to a novel habitat, specifically the influence of the G-matrix and its evolution during such processes:

Eroukhmanoff, F. & E.I. Svensson. 2011. Evolution and stability of the G-matrix during colonization of a novel environement. Journal of Evolutionary Biology 24: 1363-1373.

ABSTRACT: Populations that undergo a process of rapid evolution present excellent opportunities to investigate the mechanisms driving or restraining adaptive divergence. The genetic variance–covariance matrix (G) is often considered to constrain adaptation but little is known about its potential to evolve during phenotypic divergence. We compared the G-matrices of ancestral and recently established ecotype populations of an aquatic isopod (Asellus aquaticus) that have diverged in parallel in two south Swedish lakes. Phenotypic changes after colonization involved a reduction in overall size, lost pigmentation and changes in shape. Comparisons between G-matrices reveal close similarity within the same ecotype from different lakes but some degree of differentiation among ecotypes. Phenotypic divergence has apparently not been much influenced by the orientation of G. Additive genetic variation in the newly colonized habitats has also decreased substantially. This suggests that a process of adaptation from standing genetic variation has occurred and has probably facilitated phenotypic divergence.

Finally, I wanted to draw your attention on two recently published papers on the sparrow species complex (House-Spanish-Italian) originating from my new research group in Oslo, with my postdoc host Glenn-Peter Saetre and two of his PhD students Jo Hermansen and Tore Elgvin among others. These two papers present in detail molecular and phenotypic evidence for one of the first reported cases of hybrid speciation in birds and discuss a role for sex chromosomes, which we know has been a hot topic in birds in relation with mate choice and hybridization/speciation. These two papers will soon appear in a new issue of Molecular Ecology along with some Perspective piece but they are already available online: 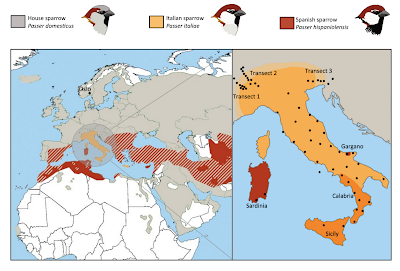 During the past decade, the ecological theory of adaptive radiation and adaptive speciation has been a main focus of interest in much speciation research. Much of current thinking in this area assumes that incipient species are formed as a direct or indirect result of niche-based ecological differences and divergent natural selection.

However, more recently it has been an increased interest also in non-ecological and non-adaptive speciation in groups like birds, fish, amphibians and insects. Some radiations are simply not very likely to result from divergent ecological selection, as species are often ecologically similar and show high degree of niche conservatism, yet speciation obviously happens also in these groups. Behavior might play a crucial role in driving speciation processes in these circumstances, including learned mate preferences, sexual selection and sexual conflict. These and related topics will be the focus of one-day scientific meeting at Lund University (Sweden) on August 18 2012.

On August 18 2012, we are therefore proud to organize this one-day meeting (free of charge) entitled "The Role of Behaviour in Non-adaptive and Non-ecological Speciation".

This meeting is funded by the European Science Foundation's (ESF) Frontier's of Speciation Research FroSpects, and will be one of several post-conference symposia the day after The International Behavioural Ecology Congress ("ISBE 2012") that will take place between August 12 and August 17 2012.

Note that although the ESF-meeting is free of charge, the preceeding ISBE-congress is not. The meeting is open both for ISBE-participants and those who wish to only come for to the speciation meeting. Coffee and refreshments will be served on August 18, but participants will have to fund and organize travel, meals and ackomodation for themselves.

In addition to three excellent invited keynote speakers (Dr. Rampal S. Etienne, Prof. Kerry Shaw and Prof. John Wiens), we will also accept contributed talks (15 minutes, including 3 minutes of questions) to this meeting. Send an abstract (100-200 words) to Dr. Maren Wellenreuther (maren.wellenreuther@biol.lu.se), no later than April 2012.  More general questions about the meeting can be answered by Prof. Erik Svensson (erik.svensson@biol.lu.se).

Written by Unknown kl. 9:00 AM 4 kommentarer

Our annual lab-barbecue in Dalby on July 2 2011

Our annual lab-barbecue took place at Lyftvägen in Dalby, as usual, and for the 12th season in a row (starting in the summer of 2000, in Lund). In spite of rain early on, it became very nice, and included good food, barbecue and "kubb"-spel. Thanks everyone for coming, and see some of you next year!
Written by Unknown kl. 1:55 PM 2 kommentarer