Abstract
Global warming is increasing the overheating risk for many organisms, though the potential for plasticity in thermal tolerance to mitigate this risk is largely unknown. In part, this shortcoming stems from a lack of knowledge about global and taxonomic patterns of variation in tolerance plasticity. To address this critical issue, we test leading hypotheses for broad-scale variation in ectotherm tolerance plasticity using a dataset that includes vertebrate and invertebrate taxa from terrestrial, freshwater and marine habitats. Contrary to expectation, plasticity in heat tolerance was unrelated to latitude or thermal seasonality. However, plasticity in cold tolerance is associated with thermal seasonality in some habitat types. In addition, aquatic taxa have approximately twice the plasticity of terrestrial taxa. Based on the observed patterns of variation in tolerance plasticity, we propose that limited potential for behavioural plasticity (i.e. behavioural thermoregulation) favours the evolution of greater plasticity in physiological traits, consistent with the ‘Bogert effect’. Finally, we find that all ectotherms have relatively low acclimation in thermal tolerance and demonstrate that overheating risk will be minimally reduced by acclimation in even the most plastic groups. Our analysis indicates that behavioural and evolutionary mechanisms will be critical in allowing ectotherms to buffer themselves from extreme temperatures.

Written by Anonymous kl. 6:48 AM 0 kommentarer

Posted by Anna Nordén, on behalf of Katrine Lund-Hansen

Link to the paper is here

When: Tuesday, February 23th, 10 am
Where: Argumentet

Abstract: Although males are generally less discriminating than females when it comes to choosing a mate, they still benefit from distinguishing between mates that are receptive to courtship and those that are not, in order to avoid wasting time and energy. It is known that males of Drosophila melanogaster are able to learn to associate olfactory and gustatory cues with female receptivity, but the role of more arbitrary, visual cues in mate choice learning has been overlooked to date in this species. We therefore carried out a series of experiments to determine: 1) whether males had a baseline preference for female eye color (red versus brown), 2) if males could learn to associate an eye color cue with female receptivity, and 3) whether this association disappeared when the males were unable to use this visual cue in the dark. We found that naive males had no baseline preference for females of either eye color, but that males which were trained with sexually receptive females of a given eye color showed a preference for that color during a standard binary choice experiment. The learned cue was indeed likely to be truly visual, since the preference disappeared when the binary choice phase of the experiment was carried out in darkness. This is, to our knowledge 1) the first evidence that male D. melanogaster can use more arbitrary cues and 2) the first evidence that males use visual cues during mate choice learning. Our findings suggest that that D. melanogaster has untapped potential as a model system for mate choice learning.
Written by Anna Nordén kl. 7:27 AM 0 kommentarer

Again. I know that we discussed this topic not too long ago, but I feel that the issue is not satisfyingly resolved and I got a bit stuck with it... Therefore, I would like to discuss a paper by Dayan et al., 2015, Mol Ecol, that tackles this controversy. The authors are trying to assess the role of phenotypic plasticity in evolution by comparing gene expression patterns in killifish (Fundulus spp.). They are contrasting divergent populations and test to what extent their ability to acclimate to different temperatures varies. They address questions such as whether plasticity and genetic divergence operate in parallel on the same set of genes, or what the magnitude of the plastic response is compared to the evolved response. I think these are exciting questions and I hope you enjoy reading the paper and discussing their ideas (don't get scared by the stats!).

Link to the paper is here and there is also a little commentary on it here.

This week for lab meeting I thought it might be fun to read this recent paper that explores the gut microbiome of the Iceman mummy to draw inference on the evolutionary history of human stomach ailments. I'll bring some fika that will hopefully sit well with your microbiome;) 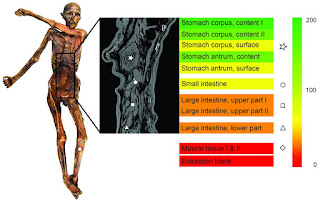 The 5300-year-old Helicobacter pylori genome of the Iceman

Written by Unknown kl. 3:58 AM 1 kommentarer