Next lab meeting: genetics of ageing

For next week's lab meeting, I suggest we can talk about this study on sexual dimorphism of life span in Drosophila. It's an interesting topic to me and also relevant to our fly works.

Abstract: Males and females differ with respect to life span and rate of aging in most animal species. Such sexual dimorphism can be associated with a complex genetic architecture, where only part of the genetic variation is shared between the sexes. However, the extent to which this is true for life span and aging is not known, because studies of life span have given contradictory results and aging has not been studied from this perspective. Here we investigate the additive genetic architecture of life span and aging in Drosophila melanogaster. We find substantial amounts of additive genetic variation for both traits, with more than three-quarters of this variation available for sex-specific evolutionary change. This result shows that the sexes have a profoundly different additive genetic basis for these traits, which has several implications. First, it translates into an, on average, three-times-higher heritability of life span within, compared to between, the sexes. Second, it implies that the sexes are relatively free to evolve with respect to these traits. And third, as life span and aging are traits that integrate over all genetic factors that contribute to mortal disease, it also implies that the genetics of heritable disease differs vastly between the sexes.

N.B.!  As per our discussion last week, everyone should prepare two short contributions about the paper to share with the group.  These need not be anything very extensive - questions about the content, short observations about your thoughts on the paper (e.g. interesting or not, and why), if there was something you thought was unclear, etc.  All these things are fine.
Written by JessicaKAbbott kl. 5:27 AM 0 kommentarer


Posted by Jessica Abbott on behalf of Katrine Lund Hansen 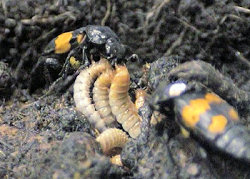 Abstract: Theory predicts that male response to reduced paternity will depend on male state and interactions between the sexes. If there is little chance of reproducing again, then males should invest heavily in current offspring, regardless of their share in paternity. We tested this by manipulating male age and paternity assurance in the burying beetle Nicrophorus vespilloides. We found older males invested more in both mating effort and parental effort than younger males. Furthermore, male age, a component of male state, mediated male response to perceived paternity. Older males provided more prenatal care, whereas younger males provided less prenatal care, when perceived paternity was low. Adjustments in male care, however, did not influence selection acting indirectly on parents, through offspring performance. This is because females adjusted their care in response to the age of their partner, providing less care when paired with older males than younger males. As a result offspring, performance did not differ between treatments. Our study shows, for the first time, that a male state variable is an important modifier of paternity–parental care trade-offs and highlights the importance of social interactions between males and females during care in determining male response to perceived paternity.

Tuesday September 24th, 10:30 in Argumentet as usual and I will provide some fika.
Hope to see you there!

Written by JessicaKAbbott kl. 4:46 AM 0 kommentarer

How does penis size influence male attractiveness in humans?

Next week we'll discuss how penis size together with height and body shape influence male attractiveness in humans. One of the authors, Brian Mautz, actually presented the results from this study at the ESEB congress in August this year and it generated a lot of interesting questions and discussion, which I hope we will have as well.

Abstract: Compelling evidence from many animal taxa indicates that male genitalia are often under postcopulatory sexual selection for characteristics that increase a male’s relative fertilization success. There could, however, also be direct precopulatory female mate choice based on male genital traits. Before clothing, the nonretractable human penis would have been conspicuous to potential mates. This observation has generated suggestions that human penis size partly evolved because of female choice. Here we show, based upon female assessment of digitally projected life-size, computer-generated images, that penis size interacts with body shape and height to determine male sexual attractiveness. Positive linear selection was detected for penis size, but the marginal increase in attractiveness eventually declined with greater penis size (i.e., quadratic selection). Penis size had a stronger effect on attractiveness in taller men than in shorter men. There was a similar increase in the positive effect of penis size on attractiveness with a more masculine body shape (i.e., greater shoulder-to-hip ratio). Surprisingly, larger penis size and greater height had almost equivalent positive effects on male attractiveness. Our results support the hypothesis that female mate choice could have driven the evolution of larger penises in humans. More broadly, our results show that precopulatory sexual selection can play a role in the evolution of genital traits.

Tuesday September 17th, 10:30 in Argumentet as usual and I will provide some fika.
Hope to see you there!
Written by Anna Nordén kl. 5:44 AM 332 kommentarer

Paper for next week's meeting!

10.30 Tues in Darwin
fika will be provided!
Written by Anonymous kl. 7:29 AM 1 kommentarer