Posted by Jessica Abbott
For next week's group meeting I've chosen a paper that just came out, about the effect of self-fertilization on the rate of adaptation. We expect that in the long term, selfing depletes genetic variance. However in the short term, selfing may produce a more rapid reponse to selection. This study attempts to disentagle effects of contemporary selfing from historical selfing on the rate of adaptation, using experimental evolution in the snail Physa acuta. A commentary on this article is also avaliable here.

Title: Experimental evidence for the negative effects of self-fertilization on the adaptive potential of populations.
Abstract: Self-fertilization is widely believed to be an “evolutionary dead end”, increasing the risk of extinction and the accumulation of deleterious mutations in genomes. Strikingly, while the failure to adapt has always been central to the dead-end hypothesis, there are no quantitative genetic selection experiments comparing the response to positive selection in selfing versus outcrossing populations. Here we studied the response to selection on a morphological trait in laboratory populations of a hermaphroditic, self-fertile snail under either selfing or outcrossing. We applied both treatments to two types of populations: some having undergone frequent selfing and purged a substantial fraction of their mutation load in their recent history, and others continuously maintained under outcrossing. Populations with a history of outcrossing respond faster to selection than those that have experienced selfing. In addition, when self-fertilization occurs during selection, the response is initially fast but then rapidly slows, while outcrossing populations maintain their response throughout the experiment. This occurs irrespective of past selfing history, suggesting that high levels of inbreeding depression, contrary to expectation, do not set strong limits to the response to selection under inbreeding, at least at the timescale of a few generations. More surprisingly, phenotypic variance is consistently higher under selfing, although it quickly becomes less responsive to selection. This implies an increase in non-heritable variance, hence a breakdown of developmental canalization under selfing. Our findings provide the first empirical support of the short-term positive and long-term negative effects of selfing on adaptive potential.
When: Tuesday January 31st, at 10.00.
Written by JessicaKAbbott kl. 12:12 AM 0 kommentarer

Next week we will discuss the following paper by Cheng & Kirkpatrick for EXEB meeting:

See you in Darwin at 10am!
Written by Stephen De Lisle kl. 1:52 AM 0 kommentarer

Tobias will be teaching in Czech Republic next Tuesday (Jan 17), so I'm jumping the queue ;-)
I would like to discuss the following paper:
The “Domestication Syndrome” in Mammals: A Unified Explanation Based on Neural Crest Cell Behavior and Genetics

I think the authors are putting forward a very original idea that is worth while following up! In a nutshell: they suggest that a concerted response of neural crest cells is underlying the suite of traits that domesticated mammals have in common: floppy ears, smaller teeth, increased docility and tameness, curly tail, smaller brains etc.

See you in Darwin's at 10 am on Tuesday!

Abstract:
Charles Darwin, while trying to devise a general theory of heredity from the observations of animal and plant breeders, discovered that domesticated mammals possess a distinctive and unusual suite of heritable traits not seen in their wild progenitors. Some of these traits also appear in domesticated birds and fish. The origin of Darwin’s “domestication syndrome” has remained a conundrum for more than 140 years. Most explanations focus on particular traits, while neglecting others, or on the possible selective factors involved in domestication rather than the underlying developmental and genetic causes of these traits. Here, we propose that the domestication syndrome results predominantly from mild neural crest cell deficits during embryonic development. Most of the modified traits, both morphological and physiological, can be readily explained as direct consequences of such deficiencies, while other traits are explicable as indirect consequences. We first show how the hypothesis can account for the multiple, apparently unrelated traits of the syndrome and then explore its genetic dimensions and predictions, reviewing the available genetic evidence. The article concludes with a brief discussion of some genetic and developmental questions raised by the idea, along with specific predictions and experimental tests.
Written by Nathalie kl. 11:42 AM 0 kommentarer

Posted by Erik Svensson
The year 2016 might have been a depressing year on the world political front, but at least it was very good when it comes to our very stimulating EXEB-meetings and other scientific activities in the Biology Department. Above, I have posted some pictures of EXEB-members from the Christmas Meeting of the Evolutionary Ecology Unit.
Below is the schedule for EXEB-meetings in spring 2017, based on input from those of you who responded to my Doodle-poll. For some of you, I have put two or three names at some dates, meaning that you can share the task in between you. As before, we should strive for a nice mixture between journal club, informal talks by ourselves or temporary visitors and general discussions about various topics. Also, as before, it is the person responsible for a Tuesday meeting that is responsible to finding a substitute, should (s)he not be able to make it. Also, as before, the blogpost announcing the meeting should be put up the week before, e. g. on Thursday or Friday,  so that the rest of the group has time to download and read the paper, if will be an article discussion.
As I will be travelling and doing field work with Beatriz Willink this winter (January 12 - February 24), I have made our two "brutal" and highly qualified postdocs Stephen De Lisle and Nathalie Feiner responsible for "policing" these meetings, and they will make sure to remind the persons responsible to do their work and put up the blog post in time. And of course remind them to bring fika! 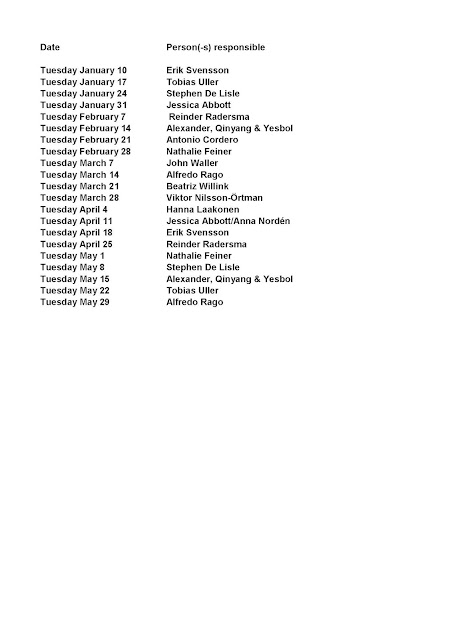 Written by Unknown kl. 5:59 AM 0 kommentarer

First EXEB-meeting of 2017: "Countdown to 150" and a discussion about why mountain tops are higher in the tropics 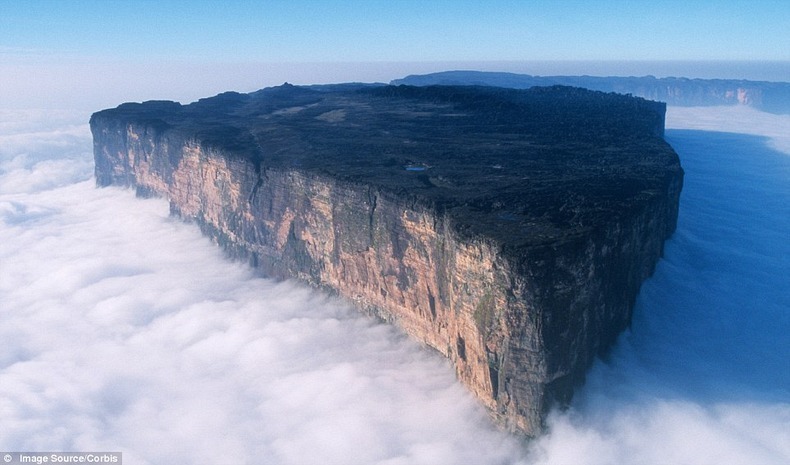 
Next week - on January 12 2017 - I am leaving together with Beatriz Willink and Hanna Bensch for a field expedition to Cameroon in Africa, where will study and collect odonates in various habitats. Given our coming field expedition to the tropics, and given that the journal ecological and evolutionary journal American Naturalist celebrates its 150th year anniversary by reminding us about some of the classical and highly-cited papers that have been published in this journal, I wanted to take the opportunity to present one such classic paper on Tuesday and discuss it with the group. The paper I am thinking of is Daniel Janzen's classical one entitled "Why mountain passes are higher in the tropics", and you can find it here.

(Full disclaimer: American Naturalist is my favourite journal, and I am member of the editorial board since several years. I especially like the journal's mix of ecology and evolution, and the aim to contribute to synthesis in biology. And of course that natural history is explicitly acknowledged as important, especially if combined with evolutionary theory. Natural history will continue to be important, in spite of being declared dead by some).

The paper was published in 1967, i. e. the same year as I was born in Sweden. Janzen was (is) a famous US-based ecologist and evolutionary biologist who is also based in Costa Rica, where he has done a lot of interesting research and made contributions to tropical conservation.