In the absence of them lucky bastards pouncing around in the Cape fijnbos or something, spotting zebras, sunbirds and eating fresh mango and grapes for lunch (no, not envious at all, clearly), we will huddle up in Argumenthet in this cold weather and discuss some fine science.
This week's paper is:
On the origins of sexual dimorphism in butterflies, by
Jeffrey C. Oliver and Antónia Monteiro
Proc. R. Soc. B (2011) 278, 1981–1988 doi:10.1098/rspb.2010.2220 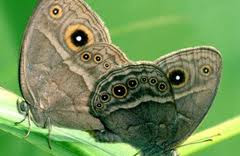 Wednesday 13.00 (the usual). Fika anyone?
The abstract: The processes governing the evolution of sexual dimorphism provided a foundation for sexual selection theory. Two alternative processes, originally proposed by Darwin and Wallace, differ primarily in the timing of events creating the dimorphism. In the process advocated by Darwin, a novel ornament arises in a single sex, with no temporal separation in the origin and sex-limitation of the novel trait. By contrast, Wallace proposed a process where novel ornaments appear simultaneously in both sexes, but are then converted into sex-limited expression by natural selection acting against showy coloration in one sex. Here, we investigate these alternative modes of sexual dimorphism evolution in a phylogenetic framework and demonstrate that both processes contribute to dimorphic wing patterns in the butterfly genera Bicyclus and Junonia. In some lineages, eyespots and bands arise in a single sex, whereas in other lineages they appear in both sexes but are then lost in one of the sexes. In addition, lineages display- ing sexual dimorphism were more likely to become sexually monomorphic than they were to remain dimorphic. This derived monomorphism was either owing to a loss of the ornament (‘drab monomorph- ism’) or owing to a gain of the same ornament by the opposite sex (‘mutual ornamentation’). Our results demonstrate the necessity of a plurality in theories explaining the evolution of sexual dimorphism within and across taxa. The origins and evolutionary fate of sexual dimorphism are probably influenced by underlying genetic architecture responsible for sex-limited expression and the degree of intralocus sexual conflict. Future comparative and developmental work on sexual dimorphism within and among taxa will provide a better understanding of the biases and constraints governing the evolution of animal sexual dimorphism.
Written by Machteld kl. 7:26 AM 2 kommentarer

It is time for a last lab-meeting before I go to South Africa for field work for three weeks. After a discussion with Jessica Abbott, I thought it would be fun to diskuss a recent conceptual paper by Russel Bonduryansky entitled: "Sexual Selection and Conflict as Engines of Ecological Diversification". You will find a copy of this paper here, and the Abstract below.

Due to other committments, I suggest we meet at 13.30,  not 13.00, in "Argumentet" on Wednesday January 18 2012.Looking forward to see you all and an interesting discussion.

Written by Unknown kl. 3:45 AM 0 kommentarer 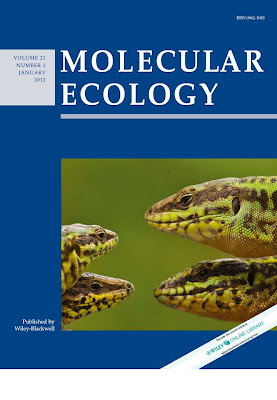 Allopatry and allopatric speciation can arise through two different mechanisms: vicariance or colonization through dispersal. Distinguishing between these different allopatric mechanisms is difficult and one of the major challenges in biogeographical research. Here, we address whether allopatric isolation in an endemic island lizard is the result of vicariance or dispersal. We estimated the amount and direction of gene flow during the divergence of isolated islet populations and subspecies of the endemic Skyros wall lizard Podarcis gaigeae, a phenotypically variable species that inhabits a major island and small islets in the Greek archipelago. We applied isolation-with-migration models to estimate population divergence times, population sizes and gene flow between islet–mainland population pairs. Divergence times were significantly correlated with independently estimated geological divergence times. This correlation strongly supports a vicariance scenario where islet populations have sequentially become isolated from the major island. We did not find evidence for significant gene flow within P. g. gaigeae. However, gene-flow estimates from the islet to the mainland populations were positively affected by islet area and negatively by distance between the islet and mainland. We also found evidence for gene flow from one subspecies (P. g. weigandi) into another (P. g. gaigeae), but not in the other direction. Ongoing gene flow between the subspecies suggests that even in this geographically allopatric scenario with the sea posing a strong barrier to dispersal, divergence with some gene flow is still feasible.
Written by Anna Runemark kl. 2:50 AM 0 kommentarer

Lab-meeting on the evolution of plasticity in changing environments

This Wednesday (January 11 2012), we will discuss a relatively recent theoretical and conceptual paper in PLoS Biology entitled "Adaptation, plasticity and extinction in a changing environment: towards a predictive theory".  You can download it here.


Although this paper was published as recently as in 2010, but has already received 79 citations - a sign of a quite an influential paper. This is not surprising as it connects such topics as climate change, thermal adaptation and niche modelling with the evolution of phenotypic plasticity - all very important and central topics in ecology and evoutionary biology. Below you will find the Abstract for the paper. One of the co-authors is legendary evolutionary quantitative geneticist Russel Lande, by the way.

Many species are experiencing sustained environmental change mainly due to human activities. The unusual rate and extent of anthropogenic alterations of the environment may exceed the capacity of developmental, genetic, and demographic mechanisms that populations have evolved to deal with environmental change. To begin to understand the limits to population persistence, we present a simple evolutionary model for the critical rate of environmental change beyond which a population must decline and go extinct. We use this model to highlight the major determinants of extinction risk in a changing environment, and identify research needs for improved predictions based on projected changes in environmental variables. Two key parameters relating the environment to population biology have not yet received sufficient attention. Phenotypic plasticity, the direct influence of environment on the development of individual phenotypes, is increasingly considered an important component of phenotypic change in the wild and should be incorporated in models of population persistence. Environmental sensitivity of selection, the change in the optimum phenotype with the environment, still crucially needs empirical assessment. We use environmental tolerance curves and other examples of ecological and evolutionary responses to climate change to illustrate how these mechanistic approaches can be developed for predictive purposes.
Written by Unknown kl. 4:51 AM 0 kommentarer

Happy New Year 2012! Let's start with some social activity and a lab-meeting

I hope everybody have enjoyed your well-deserved holidays, and you are now full of energy when returning to Lund! What else could then be better than to start with some social activity? I suggest we aim for this on Tuesday January 3 2012, when we meet at 18.00 at the pub "Bishop Arms" in Lund. We will then have time to eat (if we wish to), and can decide if we want to stay in the pub the whole evening, go to another one, or even go for a late movie around 21.00.

A new year also means new intellectual and scientific challenges. One such challenge is to always question old "truths", including once own's scientific biases. One such "truth", which I have myself defended in a recent blog post, is the importance of carefully distinguishing between proximate and ultimate explanations in evolutionary biology. I wrote this blog post after a recent ASAB-meeting in London in December, when both I and Machteld Verzijden were critical of Malin Ah-Kings suggestion that evolutionary explanations ("ultimate" explanations" for why animals reproduce ("animals reproduce to maximize their fitness") could be replaced by the proximate explanation ("animals reproduce for the sake of pleasure"). As I pointed out, these two explanations are not mutually exclusive, but rather complementary, and adress different "layers" of reality.

My own position here is not very controversial, but rather mainstream among today's evolutionary biologists, and I referred to the important conceptual insights by evolutionary biologist Ernst Mayr and ethologist Niko Tinbergen, who laid the groundwork for this way of viewing nature and biology. It is now 50 years ago since Ernst Mayr published his important paper in Science entitled "Cause and effect in biology", and time is therefore mature to return to this classic paper and critically examine if its main message is still valid. We should therefore read this paper on this weeks lab-meeting (Wednesday, January 4 at 13.00), together with a new critical review in the same journal by Kevin Laland and colleagues entitled: "Cause and Effect in Biology Revisited: is Mayr's Proximate.Ultimate Dichtomy Still useful?"

These two papers should be read in conjunction (download them here and here), and well ahead before the lab-meeting, as these are important but difficult concepts which hold a central position in evolutionary biology. In particular, we should ask ourselves if Mayr's rigid dichotomy and position (he was rigid in many other areas, e. g. sympatric speciation) is still useful, or if it hampers further conceptual advances, as argued by Laland et al. Could it even be that Mayr's position at the time when it was formulated was necessary to get rid of "murky thinking", just like George C. Williams hardcore gene selectionist standpoint was necessary to get rid of naive group selectionism? But could it be so that both the proximate-ultimate dichotomy and the dogmatic gene selectionist standpoint have now played out their role, as the former naive views have since long been abandoned and pose no serious threat anymore to clear thinking?

Lab-meeting details and reminder: Wednesday January 4, in "Argumentet" at 13.00. Any fika volunteer?
Written by Unknown kl. 4:39 AM 1 kommentarer