Hello! As one of the newest postdocs in the EXEB group, I will be presenting some of my past and current research at lab meeting next week, on Tuesday Oct. 2 at 10:30, in the Argumentet, 2nd floor, Ecology Building.

If I can identify a common thread in my rather eclectic research background, it is a fascination with the processes maintaining and promoting biological diversity.

1. For my dissertation research, I considered adaptations that contribute to the maintenance of phenotypic diversity (in the form of stable polymorphisms) within populations. My research was conducted in the side-blotched lizard system (Uta stansburiana), under Barry Sinervo at UC Santa Cruz:

Polymorphic phenotypes ("morphs") tend to involve multiple, often unlinked traits that are differentiated on more than one axis (e.g., alternative mating, foraging, antipredator, and dispersal strategies). These alternative strategies, when present, are advantageous because they increase the niche breadth of the population. However, this advantage is potentially opposed by correlational selection (multivariate disruptive selection favoring alternative combinations of traits), which can impose a recombinational genetic load, lowering the fitness of the population.


2. For my first postdoctoral research project at NCEAS, I examined factors promoting and maintaining species diversity in the California flora.

With Emma Goldberg and Rick Ree, I examined the role of the threatened and unique habitat of chaparral in promoting species diversification within two key California shrubs, Arctostaphylos and Ceanothus. These genera inhabit mesic, forest habitats in California as well as the dynamic, fire- and flood-prone, nutrient-poor, and arid chaparral habitats. Our study also piloted Emma's GeoSSE method for phylogenetic estimation of range shifts and habitat-dependent diversification. (Goldberg et al. 2011, Sys. Biol.)


With Kathleen Kay, I examined the historical factors of speciation, extinction, and migration that have contributed to the California Floristic Province's status as a biodiversity hotspot. We also examined classical hypotheses for California's diversity, which are: 1) its Mediterranean climate, and 2) its location at a broad ecotone between two Tertiary geofloras (Raven and Axelrod 1978). (Lancaster and Kay, accepted with revisions, Evolution) 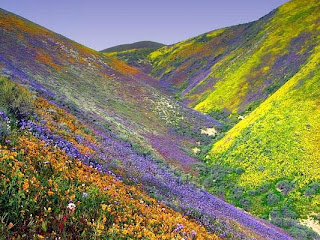 3. For my work at Lund University, I will be studying adaptation at range limits in the polymorphic blue-tailed damselfly, Ischnura elegans. Range limits are thought to be maintained by a combination of gene flow and trade-offs: adaptations to extreme conditions at range limits are often in trade-off with traits that are more advantageous towards the center of the range. Gene flow from the center of the range prevents organisms at the edges from maximizing their fitness and adapting further to more extreme conditions (beyond the stable limits). Under conditions of climate change, environmental conditions ancestrally characterizing the center of the range are expected to shift towards the edges, such that range expansion is possible. We will look for the genetic and phenotypic signatures of expanding ranges, partially focusing on changes in genetic and phenotypic diversity and thermal adaptations to extremes of heat and cold. This work is largely to be carried out, but I will present some preliminary results on how sex, developmental phase, and polymorphism explain individual variation in response to extreme heat and cold within non-range-limit populations. These results suggest possible demographic changes under changing climates and at range limits.

For more information about each of these studies, and to access the manuscripts cited here, please visit my research website: http://www.nceas.ucsb.edu/~lancaster/Welcome.html.

Thanks for coming!!
Written by Lesley Lancaster kl. 3:55 AM 0 kommentarer

Genomic basis of adaptation and linkage in sticklebacks

Recently there has come out some interesting papers on the genomic basis of adaptation, linkage and recombination in sticklebacks, and I suggest that we read one of these papers and one a bit older review on linkage for this labmeeting, Jones et al. 2012 in Nature, found here and Slatkin 2008 in Nature Reviews Genetics found here, please find the abstracts posted below. Although I don’t dare to suggest more reading I would also recommend just looking at Figs. 2-3 on page 2856 in a nice paper by Roesti et al. 2012 in Molecular Ecology (found here) which shows how reduced recombination rate at centromeres result in chromosome centre biased divergence. If anyone is interested in more extra reading there is also a paper on LD in sticklebacks by Hohenlohe et al. 2012 in Phil Trans (found here) which might also be of interest for extra reading.

I’m hoping for good discussions on the implications of these findings for our expectations of adaptation in nature, and I will bring fika to hopefully stimulate such discussions.

The genomic basis of adaptive evolution in threespine sticklebacks

Marine stickleback fish have colonized and adapted to thousands of streams and lakes formed since the last ice age, providing an exceptional opportunity to characterize genomic mechanisms underlying repeated ecological adaptation in nature. Here we develop a high-quality reference genome assembly for threespine sticklebacks. By sequencing the genomes of twenty additional individuals from a global set of marine and freshwater populations, we identify a genome-wide set of loci that are consistently associated with marine–freshwater divergence. Our results indicate that reuse of globally shared standing genetic variation, including chromosomal inversions, has an important role in repeated evolution of distinct marine and freshwater sticklebacks, and in the maintenance of divergent ecotypes during early stages of reproductive isolation. Both coding and regulatory changes occur in the set of loci underlying marine– freshwater evolution, but regulatory changes appear to predominate in this well known example of repeated adaptive
evolution in nature.

Linkage disequilibrium —understanding the evolutionary past and mapping the medical future

Linkage disequilibrium — the nonrandom association of alleles at different loci — is a sensitive indicator of the population genetic forces that structure a genome. Because of the explosive growth of methods for assessing genetic variation at a fine scale, evolutionary biologists and human geneticists are increasingly exploiting linkage disequilibrium in order to understand past evolutionary and demographic events, to map genes that are associated with quantitative characters and inherited diseases, and to understand the joint evolution of linked sets of genes. This article introduces linkage disequilibrium, reviews the population genetic processes that affect it and describes some of its uses. At present, linkage disequilibrium is used much more extensively in the study of humans than in non-humans, but that is changing as technological advances make extensive genomic studies feasible in other species.
Written by Anna Runemark kl. 4:51 AM 0 kommentarer

On the evolution of large insects 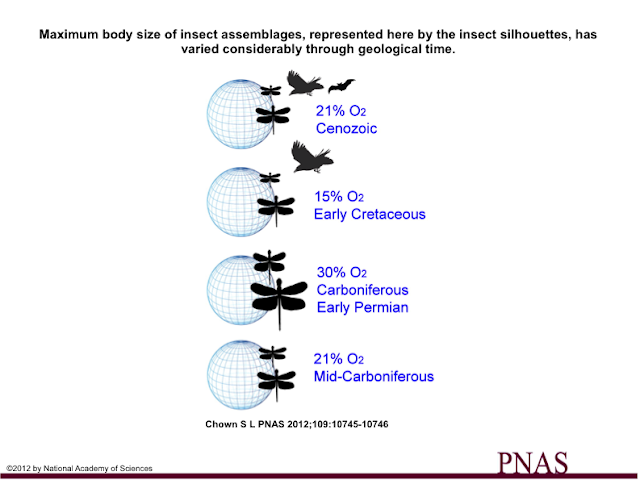 Our last lab-meeting contained an interesting discussion about the evolutionary significance of large body size in insects, stimulated by the excellent talk by Yuma Takahashi about his ongoing research on Ischnura-damselflies. I thought we should continue on the theme of body size evolution and its drivers in insects, by reading two recent papers that should hopefully be entertaining and interesting.

Both papers discuss the rise and fall of large insects, such as gigantic dragonflies during the Carboniferous Period, and the biotic and abiotic factors driving selection on both body size and wing size. Among the most discussed (but also controversial) idéas is that atmospheric oxygen levels might have been important, but predation has also been suggested to play a role.

Below, you will find the title of the papers and Abstracts and links that should allow you to download the paper if you are on the Lund University network. You can also download them here and here. You might also be interested in the short comment on the latter paper by Steven Chown, which you can download here.

Next week's lab-meeting will take place in "Argumentet" (2nd floor, Ecology Building) on Tuesday September 11  at 10.30, i. e. usual time. This time, it will be our postdoc Yuma Takahashi from Japan who will give a short and informal talk about his past and ongoing research on colour polymorphisms and frequency-dependent selection in Ischnura-damselflies. As some of you already know, Yuma did his PhD-research on the damselfly species Ischnura senegalensis, a tropical counterpart to Ischnura elegans, who we have been working on in Sweden and Europe. You can read more about Yuma's research here, and find his publications here.

Do not miss this opportunity to listen to Yuma and his interesting research. I will bring some "fika".
Written by Unknown kl. 3:40 AM 0 kommentarer

SUMMARY of the ISBE Post-Conference Symposium: The role of behaviour in non-ecological and non-adaptive speciation

On the 18th of August, we organized the Symposium 'the role of behaviour in non-ecological and non-adaptive speciation'. Invited speakers were John Wiens (Stony Brook University, USA), Rampal Etienne (University of Groningen, Netherlands) and Kerry Shaw (Cornell University, USA). We also had several contributed talks on diverse topics which filled the day from 9:00-17:30. Funding for this symposium was provided by the European Science Foundation (ESF) and the Research Networking Programme on Frontiers of Speciation Research (”FroSpects”).


John Wiens (Ecology and Evolution/Stony Brook University). Email:
Niche conservatism, ecology, and speciation
In recent years, there has been increasing interest in the role that ecology may play in speciation.  Ever since Darwin, it is typically assumed that this role involves ecological divergence between incipient species in different environments.  While this scenario is becoming increasingly well-supported, it may not be the only role of ecology in speciation, nor even though most common.  Among the geographic modes of speciation, allopatric speciation generally seems to be the most common.  I argue that the maintenance of ecological similarity over time (niche conservatism) may be a key aspect of allopatric speciation.  From first principles, a geographic barrier consisting of unsuitable ecological conditions may be necessary to geographically split an ancestral species into two allopatric populations, and this scenario requires that populations be unable to adapt to those ecological conditions quickly enough to maintain populations and gene flow across the barrier.  Therefore niche conservatism, rather than adaptation to divergent ecological conditions, should often be an essential part of allopatric speciation, even if niche divergence occurs later in the speciation process.  In this talk, I will summarize this basic model and review recent work from my lab testing this idea, both with empirical data and simulations.  We now have strong evidence for speciation through climatic niche conservatism in some cases (but with many counterexamples), and new theoretical and empirical results show when this should be expected to occur.  Behavioral habitat selection may play a critical role in speciation through niche conservatism, but this remains poorly explored. 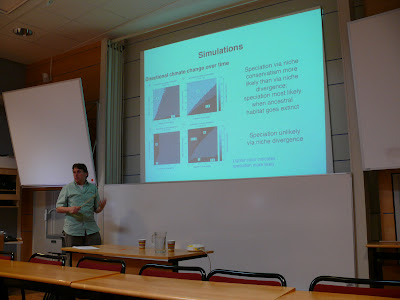 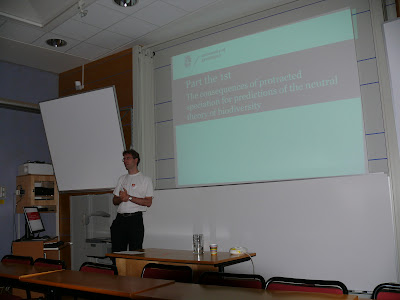 Kerry Shaw (Department of Neurobiology and Behavior, Cornell University).
The struggle for mates versus the struggle for existence:  speciation and the role of divergence in mate signaling systems 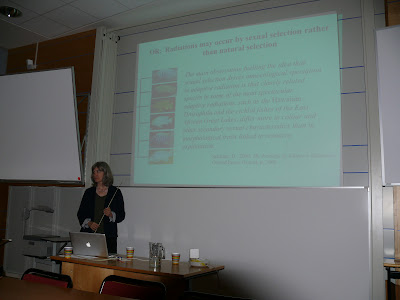 Written by Unknown kl. 3:12 AM 1 kommentarer