Next week there will be no lab-meeting as there will instead be an exciting international symposium in our department on the evolution of phenotypic plasticity: November 26-27 (two full days). The program looks very exciting, with some wellknown researchers and international guests. For more information, contact Johan Hollander (johan.hollander@biol.lu.se).

Also, the week after there will not be a regular lab-meeting, as the Evolutionary Ecology Unit will have its annual "Christmas Meeting" between December 4 and 5. There will be research talks, social activites and Christmas Dinner. If you are affiliated with the Evolutionary Ecology Unit and would like to participate, contact Anne Fogelberg (anne.fogelberg@biol.lu.se) or Per Lundberg (per.lundberg@biol.lu.se).
Written by Unknown kl. 7:20 AM 0 kommentarer

It's my turn to host the lab meeting next week, so I thought I'd continue the trend of picking unusual papers.  One that I think sounds interesting came to my attention the other day via the Oikos blog.  It's about red colouration in leaves, and whether this functions as a warning signal to herbivorous insects.  Anti-herbivory is one theory explaining why we see bright autumn colours, although the paper itself is a study of young plants.  Anyway, I thought that the question of why plant leaves can change colour might be a good subject for some discussion and speculation.  Usual time and place.

This picture is from Paudash Lake, which is fairly close to where I grew up.  I got it from Wikimedia Commons.

Here is the Oikos post, which gives some background on the paper: https://oikosjournal.wordpress.com/2012/11/13/why-red-leaves/

In many plants, leaves that are young and/or old (senescent) are not green. One adaptive hypothesis proposed that leaf color change could be a warning signal reducing insect attack. If leaf coloration involves less herbivory, it remains unclear why leaves in many species are constantly green. To examine whether green leaves reduce herbivory by physical defense as an alternative to the supposed warning signal of red leaves, we conducted comparative analyses of leaf color and protective tissues of 76 woody species in spring. The protective features (trichomes, enhanced cuticle and multiple epidermis) and the distribution of red pigments within leaves were examined in both young and mature leaves. We observed that redness was more frequent in young leaves than in senescent leaves. Compared to 36 species with red young leaves, 40 species with green young leaves showed a significantly higher incidence of enhanced cuticle and trichomes in both phylogenetic and non-phylogenetic analyses. The phylogenetic analysis indicated that the multiple origins of mechanical protection were generally associated with loss of red coloration. Our finding of relatively poor mechanical protection in red young leaves provides additional evidence for the adaptive explanation of leaf color change.
Written by JessicaKAbbott kl. 12:39 PM 2 kommentarer 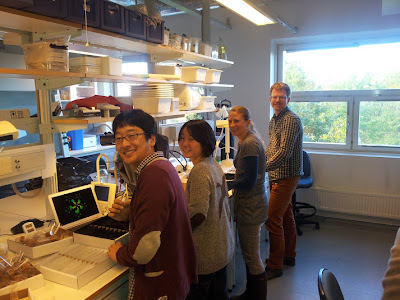 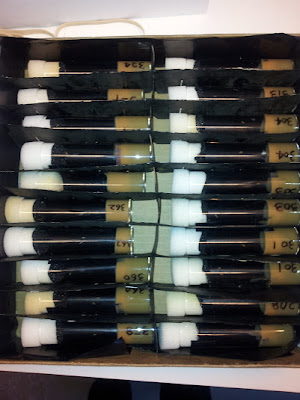 This coming Tuesday (November 6 2012), we will listen to an informal research presentation by our Japanese postdoc Natsu, who will tell us about her research progress on the genetics and function of Wing Interference Patterns (WIP:s) in Drosophila melanogaster. This is a collaborative project, involving Natsu, Jessica, Jostein Kjaerandsen and myself. Above, you see three of us and Yuma working in the laboratory, trying to get matings between males from inbred lines that differ in their WIP:s and wild-type females. Below that, you see some of the test vials where mate choice is taking place, in this case against black background, which is though to increase perception of the signal (WIP:s).

Time and place for lab-meeting as usual: "Argumentet" at 10.30 (Wednesday, November 6). Natsu will also tell us a little about her PhD-work on plant developmental biology, that took place in Japan, before she came to Lund for her postdoc to work on Drosophila. It should be very interesting, I hope. I also hope that Natsu can bring some unusual "fika", hopefully with Japanese touch :).

Most welcome!
Written by Unknown kl. 3:38 AM 0 kommentarer 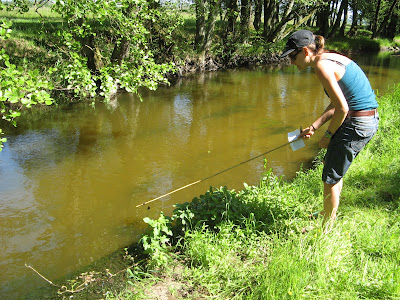 The Swedish Research Council (VR) recently announced its grants decision for 2012, and I am happy to congratulate one of our lab-members and current postdoc Maren Wellenreuther, to have obtained a "Junior Project Grant" for the next four years. These highly attractive but competitive grants is one way of entering the job market and path towards a research or faculty position in Sweden. Competition was severe this year, as previous years, with only about 16 % of all applications being granted. Well done Maren! It will be exciting to follow Marens research the coming  years, which will focus on chromosomal inversions and evolutionary divergence in seaweed flies around the coasts of Scandinavia.

Last year Jessica Abbott got a similar grant, and it continues to go very well for young researchers both within our lab and in the rest of the Biology Department in Lund. I also encourage those of you who applied this year and did not get a grant (no one mentioned, but nobody forgotten), to not give up but try again next year. Competition is severe, and margins are often tight, but it is necessary to be persistent and believe in one's idéas. I, for myself, is also very happy and grateful that I got a grant this year, and I am looking forward to not have to apply for a while, but concentrate on research.

Lastly, I would like to congratulate former PhD-student Anna Runemark, who recently got one of her thesis-papers accepted in Molecular Ecology: a study on the relationship between inbreeding depression and secondary sexual character divergence in islant populations of Podarcis-lizards. I wish Anna all luck as she awaits the postdoctoral grant decisions from VR and EU/Marie Curie later this year.
Written by Unknown kl. 3:21 AM 0 kommentarer