Lab meeting about sex chromosomes and dosage compensation in vertebrates

Next time at the lab meeting (Tuesday, April 5th) we will discuss a review by Jennifer Marshall Graves about the evolution of vertebrate sex chromosomes with an emphasis on the variation and similarity of dosage compensation mechanisms in vertebrate clades. How it works, how it might have evolved, and general patterns.

Looking forward to a fruitful discussion. Time (10 am) and place (Argumetet) as usual.

Abstract: Differentiated sex chromosomes in mammals and other vertebrates evolved independently but in strikingly similar ways. Vertebrates with differentiated sex chromosomes share the problems of the unequal expression of the genes borne on sex chromosomes, both between the sexes and with respect to autosomes. Dosage compensation of genes on sex chromosomes is surprisingly variable — and can even be absent — in different vertebrate groups. Systems that compensate for different gene dosages include a wide range of global, regional and gene-by-gene processes that differ in their extent and their molecular mechanisms. However, many elements of these control systems are similar across distant phylogenetic divisions and show parallels to other gene silencing systems. These dosage systems cannot be identical by descent but were probably constructed from elements of ancient silencing mechanisms that are ubiquitous among vertebrates and shared throughout eukaryotes.
Written by Anna Nordén kl. 11:32 AM 0 kommentarer

Next week my grad student friend and academic brother, Mike Logan will be in the area and has agreed to give a talk at our EXEB meeting (Weizhao has nicely agreed to switch to the 17/5 meeting so we could use his spot.).

Mike is currently an NSF postdoctoral fellow at Stellenbosch University in South Africa. He does exiting work on thermal biology, thermal adaptation, and its relevance to climate change. Most of his work has been with lizards but he has been involved in some recent projects with insects, so I think his work will be interesting and relevant to all of us. More details about Mike can be found on his website:
www.evolutioninthetropics.com

Below is an abstract for his talk. The talk will be about 30 minutes with plenty of time for discussion. All are welcome! 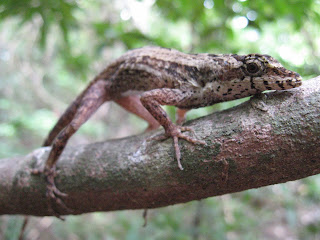 The myth of the porcelain population: are we overestimating extinction risk by underestimating the power of evolution?

Models that explore the impact of climate change at global scales predict that terrestrial ectotherms are especially prone to extinction. But in order to evaluate many species and generate broad conclusions, global models must sacrifice data resolution. In the push for sweeping generalities, is it possible that these models ignore important adaptive features of real populations? In this talk, I will use data from New World reptiles and Old World insects to argue that in situ adaptive processes will significantly reduce the negative effects of rapid environmental change for many, if not most, species.

Written by Unknown kl. 3:13 AM 0 kommentarer

Spring is here and I felt like reading something a bit different, so for the next weeks lab meeting I picked a review on the origins of multicellularity in Volvox communities. But don't worry, perhaps we can keep the discussion on more general level about evolutionary transformations and not dig ourselves into the details of Volvox signaling pathways ;-). I'll bring fika!


Origins of multicellular complexity: Volvox and the volvocine algae

Abstract
The collection of evolutionary transformations known as the ‘major transitions’ or ‘transitions in individuality’ resulted in changes in the units of evolution and in the hierarchical structure of cellular life. Volvox and related algae have become an important model system for the major transition from unicellular to multicellular life, which touches on several fundamental questions in evolutionary biology. The Third International Volvox Conference was held at the University of Cambridge in August 2015 to discuss recent advances in the biology and evolution of this group of algae. Here, I highlight the benefits of integrating phylogenetic comparative methods and experimental evolution with detailed studies of developmental genetics in a model system with substantial genetic and genomic resources. I summarize recent research on Volvox and its relatives and comment on its implications for the genomic changes underlying major evolutionary transitions, evolution and development of complex traits, evolution of sex and sexes, evolution of cellular differentiation and the biophysics of motility. Finally, I outline challenges and suggest future directions for research into the biology and evolution of the volvocine algae.http://onlinelibrary.wiley.com/doi/10.1111/mec.13551/pdf
Written by Hanna Laakkonen kl. 1:16 AM 0 kommentarer

Congratulations to Adam Hasik for obtaining PhD-position in the US 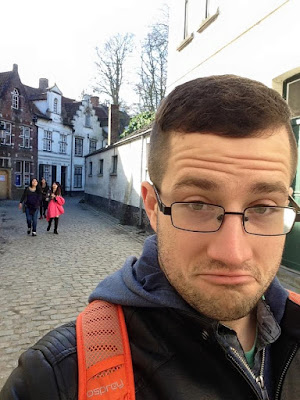 
We just heard that our Master's Student Adam Hasik, who has been with us since May 2015, working with damselfly larvae, has been awarded both a PhD-position and a scholarship to join the laboratory of Adam Siepielski at University of Arkansas.

This is great news for both Adam H and Adam S, and on behalf of myself and other EXEB members, we wish both Adams good luck in the future.

Siepielski's lab is focussed on community ecology and local adaptation using Enallagma-damselfly larvae as one major study organism, although Adam S has also made other major contributions in metaanalyses of selection. In fact, Adam and I have been collaborating recently on such a large metaanalysis on environmental and demographic determinants of selection in a working group at the National Evolutionary Synthesis Centre (NESCent) in North Carolina. With the recruitment of Adam H, we can hopefully strengthen the connections between the Siepielski and Svensson labs in the future, in spite of being on two sides of the Atlantic.
Written by Unknown kl. 1:25 PM 0 kommentarer 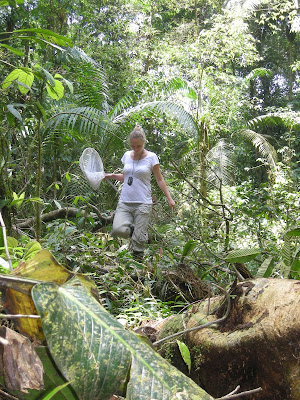 For next week's EXEB-meeting, I am pleased to welcome Wiebke Feindt from ITZ Division of Ecology & Evolution in Hannover (Germany). Wiebke is currently doing a PhD on evolution, conservation genetics and comparative transcriptomics of Neotropical odonates. She is particularly interested in the charismatic genus Megaloprepus, which contains the largest damselflies in the world and which are often called "Helicopter damselflies". Below is the title of Wiebke's talk and a brief Abstract.


Odonate speciation in the Neotropics: New insights into the genus Megaloprepus

In an ever-changing world flying insects play a significant role for studying speciation. As the world’s largest living odonate species, Megaloprepus caerulatus is an excellent model organism to investigate this crucial point of evolution. Despite its niche conservatism, a strong genetic differentiation and a morphometric separation into four distinct clusters was detected. On this basis, ongoing comparative transcriptomics may further contribute to elucidate the complex evolutionary processes and causal interplays of speciation.

For next week's discussion (March 8) I thought it might be nice to continue the recent discussions on adaptation versus plasticity. This is an empirical paper taking a multivariate approach and is also a nice example of the cool things you can do with Daphnias. Apologies for the lengthiness of the paper.

Fika will be provided.

Resurrecting complexity: the interplay of plasticity and rapid evolution in the multiple trait response to strong changes in predation pressure in the water flea Daphnia magna

Written by Unknown kl. 2:22 AM 1 kommentarer