Unfortunately Per Peetz Nielsen has to stay at home with a sick daughter tomorrow. Instead Anders will show some recent results on sex differences in learning capacity in the great tit (just like in Swedish school kids females are better). During this talk you will also eat some coffee bread. After this we will stroll down to the bird rooms in Biology house D. Here you will be able to test your spatial memory capacity against the marsh tits.
Written by Machteld kl. 2:44 AM 0 kommentarer

For the last lab meeting of 2012, we will meet Per Peetz Nielsen. Per is keen to meet people interested in animal behaviour in  and he will give a small presentation called “From working rats to swimming pigs and all the way to high tech dairy cows!”

There is currently a vivid debate in Swedish media about the welfare of our domesticated animals. Come and meet someone who tries to do something about this. Per Peetz Nielsen is an ethologist who graduated with a PhD at the  of Agricultural Science in 2008. He took his BSc in animal science from the    of Veterinary and Agricultural Sciences and a MSc in Applied Animal Behavior and Animal Welfare from the . Per has worked with how different management routines and environmental designs affect dairy cows' behavior and production, especially how different management routines affect dairy calves feeding behaviour and welfare in intensive systems. Recently Per has started working with how automatically registered data can be used to detect problems with the cows’ health and welfare. This also includes developing new techniques for automatic registration of behaviour in the barn and on pasture. Per is currently supporting several networks and authorities with information on dairy cows' behaviour and welfare on a national and international level regarding animal welfare legislations. 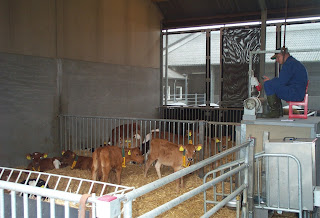 Written by Machteld kl. 1:59 AM 0 kommentarer

It is with great pleasure and happiness that we note that Anna Runemark, who defended her PhD-student in May earlier this year, has received a prestiguous postdoctoral grant from The Swedish Research Council (VR). Congratulations Anna! This requires celebration with some sparkling wine at tomorrow's lab-meeting (December 11 at 10.30). The new postdoctoral grant system means that Anna will be employed at the Biology Department in Lund, being part of our lab, but will work abroad at the University of Oslo (Norway) for two of the coming three years. She will then perform research on the genomic consequences of homoploid hybridization among Passer-sparrows in southern Europe.

Anna's achievement is well-deserved and impressive, particularly in the light of the severe competition for such grants (23 % success rate). To my knowledge, Anna was the only evolutionary biologist this year who got such a postdoc among the natural sciences in Sweden. Anna's achievement is hers, and hers only, but as a former PhD-advisor I do of course take some pride too, and takes the opportunity to boost my already big ego a bit further. I am glad that Anna keeps up my good statistics in terms of former PhD-students who get VR-postdocs: She is number five, out of five in total, resulting in a 100 % success rate (future students in this lab should take it as an encouragement and not feel stressed about it, I hope).

We also have several other reasons to celebrate tomorrow: our postdoc Maren Wellenreuther got a "Junior Researcher" grant from VR earlier in November this year, and I myself also got a four-year grant from the same agency. Further, Jessica Abbott recently got 380 000 SEK for  buying equipment to the fly lab, and Maren got 100 000 SEK from the "Nilsson-Ehle Foundation". All in all a very successful year for the lab members in terms o grants, and hopefully this will continue in the near future.

These are achievements we all should be proud of, whether we actually got a grant or not ourselves, as research is a collective enterprise and scientists do not work in isolation. One colleague's success can largely be attributed to his/her colleagues too, who have contributed to create an intellectually and scientifically stimulating research environment, and this is true whether you are a PhD-advisor, professor, lecturer, postdoc, PhD- or Master's student.

Our blog continues to attract many outside readers, since it was first launched some years ago. We have had aobut 93 000 downloads, although all not unique ones, and although some come from automatic web searches and machines, I still think that we can safely conclude that we have had thousands of human visitors. The number of downloads is currently about 1000 per month, which is a decline from about 7000 per month, before we changed the name and adress of the blog in August 2012. However, this cost in terms of lost visitors will probably be worth it in the long term, as we have a steady increase in visitors and the blog name is now more general and less person-centred.

Interestingly, the currently most popular and visited blog post of ours is the one where our new postdoc Lesley Lancaster was introduced to the other lab-members. This blog post has 1007 visits, which makes me wonder if Lesley is more famous and more popular than a post about Richard Dawkins who is number two, with only 845 downloads? Clearly, Lesley is a more up-and-coming scientist though, than Richard Dawkins who has passed his peak a long time ago.

I have gotten many positive comments from colleagues from outside, as well as putative postdocs and PhD-students who have expressed interest in joining this laboratory. Several have also said that the combination of  laboratory experimental evolution approaches (flatworms and Drosophila) and field experimental work on non-classical model organisms (damselflies, lizards, birds) is a powerful and attractive combination. The new logo above should hopefully capture this synthetic spirit of our research laboratory. Below, you can download the new header of our blog and use as a logo if you wish, or promote us to interested collegues.

Labmeeting on the genomics of species divergence

For the upcoming labmeeting we will discuss the recent Nature-paper The genomic landscape of species divergence in Ficedula flycatchers (found here) where Ellegren et al. have studied the distribution of differentiated regions across the genome. I hope that the paper will stimulate discussions both on the genomics of speciation as well as on to which extent studying differences between diverged species is informative of speciation versus of differences that accumulate following speciation.

Since this paper is a quite short read I will also send out one of Lesley’s manuscripts which she is about to submit as voluntary extra reading. The paper is testing for assortative and disassortative mating preferences in the color polymorphic side blotched lizards (Uta stansburiana). This is interesting as conflicting sources of selection on polymorphic individuals are expected in this system: negative frequency dependent  selection (females should mate disassortatively with rare males to maximize fitness) and correlational selection (females should mate  assortatively to preserve co-adapted gene complexes).  I will send out the manuscript to the labmembers tonight.

I will bring fika!
Written by Anna Runemark kl. 4:44 AM 0 kommentarer