I have been approached by several different students and colleagues who wish to obtain e-mail updates about blog posts and lab-meetings. This is of course very nice, and our regular policy should be to welcome any new readers and have an open mind to those who might wish to attend our lab-meetings. Still, however, I think we should strive to have a "core" group that always comes (or nearly always), i. e. students and postdocs associated with Jessica, me and Anders.

E-mail updates can be provided to a maximum of 10 persons ("Blogger" does not accept more e-mail adresses). That means that we can have only 10 people at a time - if somebody new comes in - some other has to go out. I have solved this problem of limited number of e-mail adresses by removing names for those colleagues (former PhD-students) who are now abroad, working in other labs, i. e. Tom Gosden, Fabrice Eroukhmanoff and Tina Karlsson. The logic is that those who are abroad cannot (for obvious reasons) participate in our regular lab-meetings, for simple logistical reasons.

Still, we might not be able to provide e-mail alerts to all interested in participating in our lab-meetings, there are at least two other ways to get information and be able to download papers: 1/Bookmark the blog (www.exeblund.blogspot.com), and check it weekly or daily or 2/join our Facebook group ("Experimental Evolution, Ecology & Behaviour"). Both these options work, and after all, e-mail is only one way of communicating and obtaining information, and not necessarily the best one.
Written by Unknown kl. 4:28 AM 1 kommentarer 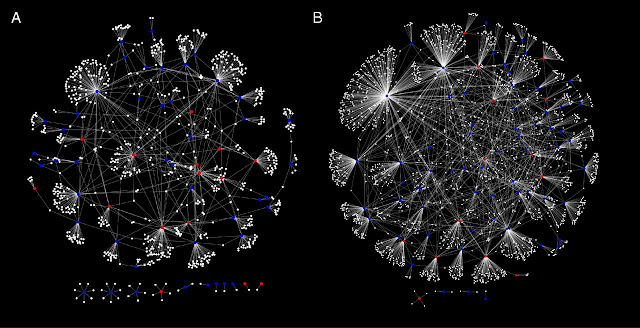 There is now a lot of activity in the Drosophila-lab, with one undergraduate student, one postdoc (Natsu) and yesterday also a PRAO-student (my daughter My). Given this, Jessica and I felt it was time to have a lab-meeting focussed on some interesting new research in evolutionary biology, focussed on the Drosophila-system.

We have therefore picked two recent PNAS-papers for discussion, one more genetic and molecular (dealing with epistasis and gene regulatory networks of starvation resistance and chill coma recovery) and one more macroevolutionary, dealing with the evolution of upper thermal limits in a phylogenetic context. Both have in common a focus on thermal adaptation. You will find Abstracts here and here, and Abstracts and titles below.

In addition, we hope Natsu could bring anbd show some printout pictures of the beatiful Wing Interference Patterns (WIP:s) of Drosophila melanogaster inbred lines. This will just be a taster, however, as Natsu will give a more formal seminar later in November telling the lab-group about the ongoing work and some preliminary results.

Epistasis—nonlinear genetic interactions between polymorphic loci—is the genetic basis of canalization and speciation, and epistatic interactions can be used to infer genetic networks affecting quantitative traits. However, the role that epistasis plays in the genetic architecture of quantitative traits is controversial. Here, we compared the genetic architecture of three Drosophila life history traits in the sequenced inbred lines of the Drosophila melanogaster Genetic Reference Panel (DGRP) and a large outbred, advanced intercross population derived from 40 DGRP lines (Flyland). We assessed allele frequency changes between pools of individuals at the extremes of the distribution for each trait in the Flyland population by deep DNA sequencing. The genetic architecture of all traits was highly polygenic in both analyses. Surprisingly, none of the SNPs associated with the traits in Flyland replicated in the DGRP and vice versa. However, the majority of these SNPs participated in at least one epistatic interaction in the DGRP. Despite apparent additive effects at largely distinct loci in the two populations, the epistatic interactions perturbed common, biologically plausible, and highly connected genetic networks. Our analysis underscores the importance of epistasis as a principal factor that determines variation for quantitative traits and provides a means to uncover genetic networks affecting these traits. Knowledge of epistatic networks will contribute to our understanding of the genetic basis of evolutionarily and clinically important traits and enhance predictive ability at an individualized level in medicine and agriculture.

Upper thermal limits vary less than lower limits among related species of terrestrial ectotherms. This pattern may reflect weak or uniform selection on upper limits, or alternatively tight evolutionary constraints. We investigated this issue in 94 Drosophila species from diverse climates and reared in a common environment to control for plastic effects that may confound species comparisons. We found substantial variation in upper thermal limits among species, negatively correlated with annual precipitation at the central point of their distribution and also with the interaction between precipitation and maximum temperature, showing that heat resistance is an important determinant of Drosophila species distributions. Species from hot and relatively dry regions had higher resistance, whereas resistance was uncorrelated with temperature in wetter regions. Using a suite of analyses we showed that phylogenetic signal in heat resistance reflects phylogenetic inertia rather than common selection pressures. Current species distributions are therefore more likely to reflect environmental sorting of lineages rather than local adaptation. Similar to previous studies, thermal safety margins were small at low latitudes, with safety margins smallest for species occupying both humid and dry tropical environments. Thus, species from a range of environments are likely to be at risk owing to climate change. Together these findings suggest that this group of insects is unlikely to buffer global change effects through marked evolutionary changes, highlighting the importance of facilitating range shifts for maintaining biodiversity.
Written by Unknown kl. 1:33 AM 0 kommentarer

Open science and "Encyclopedia of Life" - competition for projects

As we all know, our research field (ecology and evolutionary biology) are becoming increasing data-driven and to an increasing extent we are also using data collected by "others" from various internet sources. One such example is our recent paper in Ecology, where we used GBIF-data from thousands of species occurrence records, including from the Swedish source "Artportalen" ("The Species Portal") to model  and understand the environmental factors behind northern range limits in two Fennoscandian demoiselle species (the genus Calopteryx).

Increasingly, evolutionary biologists interested in organismal biology and phenotypic evolution will use phenotypic data from sources like DRYAD, as has already been used for a long time for molecular data (DNA-sequences), where GenBank is now a common source of information when constructing phylogenies for comparative purposes. Thus, researchers will not only rely on data they have collected themselves (which is often expensive and it is logistically impossible to gather more than a limited amount of data in short time), but can to an increasing extent also use data from public open databases such as GBIF.

Now, another such initiative - Encyclopedia of Life (EOL) - announces a competition for project proposals (deadline November 15). One can propose data-driven projects - a "wish list" - of what kind of data one wants and in what form, and the "best" projects will be realized. This might be an opportunity for someone in our lab (Lesley?), provided that we can come up with a good project proposal to enter this competition. Think about it at least  until November 15.

Odonates would be an example of a group where distribution data collected from amateur naturalists should ideally be compiled and become available for research projects through open databases. Unfortunately, the odonate research community is small, full of rivalry and have an unfortunate tradition of publishing in low-impact journals. Some odonate researchers and self-appointed experts are also extremely territorial about their collected occurrence data. This type of territoriality certainly hinders scientific progress and the establishment of odonates as respectable model organisms in ecology and evolutionary biology. Science should be characterized by openness and data-sharing - not by rivalry.
Written by Unknown kl. 4:51 AM 0 kommentarer

It's my turn to choose the topic for our next lab meeting, and this time I thought we'd discuss a paper that's rather different than the ones we've had so far this fall.  It's called Increasingly radical claims about heredity and fitness, and is published in the journal Philosophy of Science.  As you might guess, this paper is more about ideas than empirical research, so I hope it will generate some interesting discussion.  It questions a lot of the assumptions we make as evolutionary biologists, so I'd like everyone to think about whether you agree with the arguments the author makes, and if not, then why not.

Abstract:
On the classical account of evolution by natural selection (ENS) found in Lewontin and many subsequent authors, ENS is conceived as involving three key ingredients: phenotypic variation, fitness differences, and heredity. Through the analysis of three problem cases involving heredity, I argue that the classical conception is substantially flawed, showing that heredity is not required for selection. I consider further problems with the classical account of ENS arising from conflations between three distinct senses of the central concept of ‘fitness’ and offer an alternative to the classical conception of ENS involving the interaction of distinct evolutionary mechanisms.
Written by JessicaKAbbott kl. 6:17 AM 1 kommentarer