Posted by Jessica Abbott on behalf of Katrine Lund-Hansen

Since next week's lab meeting might be the last before summer and field season, I have chosen a paper that should be of interest to all of us. Drosophila, sexual selection, speciation, and glowing sperm.

Abstract:
Background: Identifying traits that reproductively isolate species, and the selective forces underlying their divergence, is a central goal of evolutionary biology and speciation research. There is growing recognition that postcopulatory sexual selection, which can drive rapid diversification of interacting ejaculate and female reproductive tract traits that mediate sperm competition, may be an engine of speciation. Conspecific sperm precedence (CSP) is a taxonomically widespread form of reproductive isolation, but the selective causes and divergent traits responsible for CSP are poorly understood.
Results: To test the hypothesis that postcopulatory sexual selection can generate reproductive isolation, we expressed GFP or RFP in sperm heads of recently diverged sister species, Drosophila simulans and D. mauritiana, to enable detailed resolution of species-specific sperm precedence mechanisms. Between-species divergence in sperm competition traits and mechanisms prompted six a priori predictions regarding mechanisms of CSP and degree of cross asymmetry in reproductive isolation. We resolved four distinct mechanisms of CSP that were highly consistent with predictions. These comprise interactions between multiple sex-specific traits, including two independent mechanisms by which females exert sophisticated control over sperm fate to favour the conspecific male.
Conclusions: Our results confirm that reproductive isolation can quickly arise from diversifying (allopatric) postcopulatory sexual selection. This experimental approach to ‘‘speciation phenotypes’’ illustrates how knowledge of sperm precedence mechanisms can be used to predict the mechanisms and extent of reproductive isolation between populations and species.
Written by JessicaKAbbott kl. 4:33 AM 0 kommentarer

Since we're going to have guests at our next group meeting (see previous post), I thought it might be nice to read a paper about something that all of us have a common interest in: sexual selection. I think this paper has actually come up in conversation a few times during our meetings, but as far as I can tell it's never been chosen as a discussion paper. It's a meta-analysis of sexual selection studies that shows that Fisherian models of sexually selected traits have much better empirical support than good genes theories.

Title: Meta-analysis suggests choosy females get sexy sons more than "good genes"
Abstract: Female preferences for specific male phenotypes have been documented across a wide range of animal taxa, including numerous species where males contribute only gametes to offspring production. Yet, selective pressures maintaining such preferences are among the major unknowns of evolutionary biology. Theoretical studies suggest that preferences can evolve if they confer genetic benefits in terms of increased attractiveness of sons (“Fisherian” models) or overall fitness of offspring (“good genes” models). These two types of models predict, respectively, that male attractiveness is heritable and genetically correlated with fitness. In this meta-analysis, we draw general conclusions from over two decades worth of empirical studies testing these predictions (90 studies on 55 species in total). We found evidence for heritability of male attractiveness. However, attractiveness showed no association with traits directly associated with fitness (life-history traits). Interestingly, it did show a positive correlation with physiological traits, which include immunocompetence and condition. In conclusion, our results support “Fisherian” models of preference evolution, while providing equivocal evidence for “good genes.” We pinpoint research directions that should stimulate progress in our understanding of the evolution of female choice.


Written by JessicaKAbbott kl. 10:41 AM 0 kommentarer 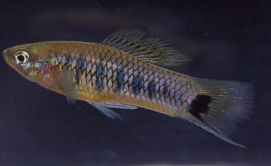 Next week our group will be visited by Molly Morris and Oscar Rios-Cardenas, as part of a STINT-funded collaborative project. They work on the evolution of mating behaviors, animal communication, alternative reproductive tactics and adaptive plasticity in swordtail and platy fishes (Xiphophorus, see picture). The project that we will be working on ties together two of my research interests: reproductive strategy polymorphism and intralocus conflict. We will namely try to investigate whether there is intralocus conflict between alternative reproductive tactics.

You can find our more about Molly and Oscar here:

We have also published a paper together on intralocus tactical conflict, which is available here:
http://www.sciencedirect.com/science/article/pii/B9780124071865000070

Written by JessicaKAbbott kl. 4:43 AM 0 kommentarer