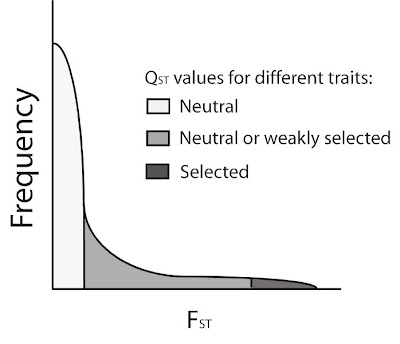 Time for another study from the Svensson Lab:

In a recent study published (in early view) in Molecular Ecology, we (Erik Svensson, Anders Hargeby and myself) have quantified phenotypic and quantitative genetic divergence between two ecotypes of our favorite study organism, the aquatic isopod (Asellus aquaticus) in two lakes in southern Sweden. We have tried to assess the relative role of selection and genetic drift during rapid and parallel ecotype divergence events. We demonstrate that for seven quantitative traits, the average QST between ecotypes is significantly greater than the mean FST, which is clearly consistent with a role for divergent selection causing phenotypic and genetic differentiation of these ecotypes. However, some QST-values for traits linked to size-related morphology fall within the distribution of neutral FST-values, whereas it is not the case for pigmentation traits. Our study therefore underscores the need for caution when evolutionary inferences are made from FST-QST analysis.

For instance, many FST-QST studies have investigated large number of populations and traits, without prior ecological and historical knowledge of the system. This aspect is important because if, like it is in our case, you investigate a case of parallel evolution, you may use specific pairwise comparisons as "replicates", and others as “controls”. The hierarchical structure of the populations and their history might therefore be of importance.

Second, neutral markers may sometimes not be so neutral, thus it is important to compare the distributions of FST with the distributions of QST, and not their means, if one wants to infer the role of selection in the divergence process. All these issues have been reviewed in a very nice paper by Whitlock also published in Molecular Ecology in 2008 and that we have discussed in a previous lab-meeting.

A last point I would like to insist on is that of course, this kind of approach will never beat the advantages of directly measuring selection in the wild. However, it might also be tricky to determine is selection is driving divergence between two populations even when estimating selection in the wild, since it is often difficult to encompass all its components at once, for example linked to fecundity, mate choice, intrinsic survival, predation, etc. Thus, by using FST-QST comparisons, one will estimate the role of the “net” selection differential between populations and its role during divergence. And this is also an advantage.

Well, I hope it inspired you to read our paper…
Written by Fab kl. 1:42 AM