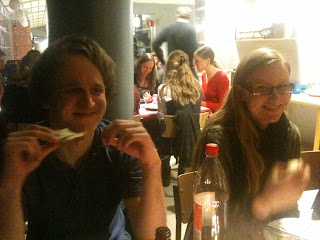 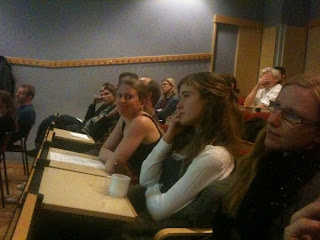 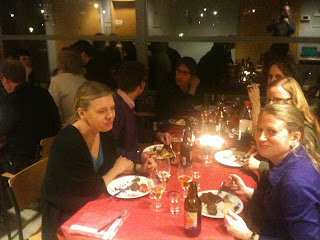 Another year has soon passed, and I wish to say Merry Christmas and a Happy New Year to all of you involved in research in lab. This includes both those of you who are currently in Lund, and those of you who are elsewhere in the world, such as in exotic countries like Norway and Australia.

The pictures above come from the Christmas Meeting in the new Evolutionary Ecology Unit, which was held last week. After talks in the afternoon by several group members and other colleagues in the new unit, it was time for the traditional Swedish Christmas Table, or "Julbord" As you see, Jessica Abbott participated too, after several years of exile in Canada and Uppsala. Jessica will start her new position in Lund in January 2012, after receiving her "Junior Project Grant" from Vetenskapsrådet in 2011. Tina Karlsson also participated, and she will leave to start her postdoc in Finland (Helsinkki) in May 2012.

The year 2011 was an extremely successful year for our lab, in terms of succesful grant applications. Apart from Jessica obtaining a VR-grant and Tina getting a postdoc-grant from VR, Fabrice Eroukhmanoff obtained an EU/Marie Curie postdoc in December, and Machteld Verzijden got extension on her postdoc from the Wennergren Foundation. Considering the severe competition for grants these days, I am both amazed and proud of these achievements of you guys. And you should be as well, of course.

The year 2011 was also  successful in terms of publishing, with nice papers in leading journals, such as Animal Behaviour, BMC Evolutionary Biology, Heredity, Evolution, Journal of Evolutionary Biology, to name a few. We are clearly doing work that is interesting and relevant, and I have the feeling we are moving in the right direction to be even more succesful in the coming years.

Once again: Merry Christmas and enjoy the break! See you in 2012!