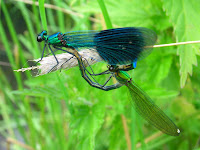 Recently, I participated in a very interesting Frospects workshop in the UK about hybridization and speciation and organized by Roger Butlin and Mike Ritchie, under the coordination of Ulf Dieckman. Several invited experts such as Godfrey Hewitt, Richard Abbott, James Mallet or Karin Pfennig presented their views on hybridization and how it is (or should be) more and more recognized as a creative evolutionary force in many aspects including speciation (one of the classic examples being homoploid or polyploidy hybrid speciation). But another (among many) particularly interesting discussion that took place originated from an argument presented by evolutionary and behavioral ecologist Karin Pfennig. It deals with the possible outcomes of reinforcement and how it might induce reproductive isolation between allopatric and sympatric populations of the same species through divergence of mate preferences. It is thus very relevant to some of the systems we are working on, such as Calopteryx damselflies.

Indeed, in some cases, selection against heterospecific matings may incidentally result in individuals from conspecific populations which are either situated in sympatry or allopatry leading to the initiation of reproductive isolation between formerly conspecific populations (Pfennig & Ryan 2006 Proc. Roy. Soc. B). For example, Jaenike et al. (2006, PloS Biology) showed that, between two sympatric species of Drosophila, strong hybrid inviability could not only select discrimination of heterospecifics, but also incidentally lead to discrimination of conspecifics from allopatric populations. Anpther example, although a bit more complicated as it involves different sympatric populations instead of allopatric and sympatric ones can be found in Hoskins et al. (2006, Nature), but there the data on divergence in mating preferences is quite interesting.

Remarkably, we have actually kind of obtained a similar result in one of our previous study (Svensson et al. 2006 Evolution), where we found that strong divergent sexual selection was accompanied by a significant decrease of female response towards conspecifics from other populations. This is corroborated by another study yet from our group, that found reduced gene flow between some of these populations (Svensson et al. 2004 Heredity), like it has been found in other systems (Rice and Pfennig 2010). I had myself never really thought about it that way, and this opened my mind a lot I must say on what Erik and others of our group have done in the past. And what about learning then? Well, we know it is likely to play an important role in divergence of mate preferences in our system (Svensson et al. 2010 Evolution), and all things considered it might even facilitate this process, as mate choice may change faster and thus the constraining effects of gene flow in the early stages will then not be an issue anymore.

We all concluded that evaluating this type of scenario may be possible with existing data or systems. In particular, studies of reinforcement and reproductive character displacement often involve comparisons of reproductive traits between sympatry and allopatry. But I guess in our case, there might be ways to use existing data and design new experiements to test specifically this type of hypothesis and whether such a process can actually promote speciation or why conspecific populations never really speciate, only maintaining a moderate level of divergence (genetic constraints, learning etc.?). Maybe you guys are already long aware of this, but I still wanted to shareit, as it was new for me, and I hope you find this as interesting as I did, and that it stimulates some new ideas maybe?