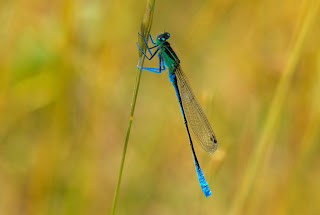 In keeping with the last two posts Erik has asked me to write a small blog spot introducing our recent Am Nat paper. I am pleased with the outcome as there was not only a lot of work getting the data and writing the paper, but also in convincing the editors and referees that this paper deserves to be in Am Nat. We were lucky this time as there was only one round of reviews, although the associate editor did a good job of ensuring we worked for our spot. It is easy to over look the amount of work and time needed to get papers published after writing the final draft. There is certainly no such thing as a free lunch. Even after jumping through fiery hoops, there is still the chance they can turn around a shoot you down.
I am yet to find a large error, this is mainly due to not looking over it since it was released. Please don't point any out to me, let me have a few weeks of ignorance.
So here is the Abstract:
Genetic variation in female resistance and tolerance to male mating harassment can affect the outcome of sexually antagonistic mating interactions. We investigated female mating rates and male mating harassment in natural populations of a damselfly (Ischnura elegans). This damselfly species has a heritable sex‐limited polymorphism in females, where one of the morphs is a male mimic (androchrome females). The three female morphs differ in mating rates, and these differences are stable across populations and years. However, the degree of premating resistance toward male mating attempts varied across generations and populations. Male mating harassment of the female morphs changed in a density‐dependent fashion, suggesting that male mate preferences are plastic and vary with the different morph densities. We quantified morph differences in male mating harassment and female fecundity, using path analysis and structural equation modeling. We found variation between the morphs in the fitness consequences of mating, with the fecundity of one of the nonmimetic morphs declining with increasing male mating harassment. However, androchrome females had lower overall fecundity, presumably reflecting a cost of male mimicry. Density‐dependent male mating harassment on the morphs and fecundity costs of male mimicry are thus likely to contribute to the maintenance of this female polymorphism.
Link to the paper and to the press release (complete with Erik's fantastic photos)
I will also take this opportunity to bring your attention to another lab paper by Jessica and I. This is in the early view slots for Ecological Entomology. It is the first time that Erik let go of the reins and let his first two students run free. Hopefully we didn't let him down.
Written by Tom kl. 4:44 PM