The big change: Lessons from down under. 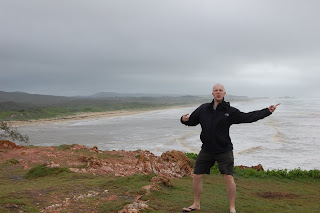 Now I have settled somewhat into my new environment I feel I can post my first blog on the pros and cons I have experienced from changing system and moving abroad for the obligatory post doc position. This is a time of self-discovery and a period when you ask yourself “can I really do this or I am well out of my depth”. It is also done away from family and friends, with an odd feeling that you have been forgotten by those you left behind.

One of the hardest parts of the move has been being the new boy again, the dreaded feeling of neediness and having to ask someone about every small thing you encounter, from simple things such as printer access (this took 3 weeks to fix) and software availability to the large things such as where do I get coffee. I have also found myself feeling like I did when I started my phd. I would leave Erik’s room full of self-doubt and worry after having a myriad of new terms and ideas thrown at me and spend the whole afternoon reading up trying to understand what had just happened, thinking, “what the hell am I doing here”. The real difference now is that this time I have the confidence to say “woah, slow down buddy, what the f**k does that all mean”. Still on the 15th time of doing so, self-doubt does start to rear it’s head again as I ask myself “why am I still doing this to myself”.

Now, I find myself starting to get the lingo, even occasionally dropping the odd line into conversions, “yeah, isolines, tip the females, pooter the males, great”.

Having to learn a new system in also about coming to terms with both the advantages and disadvantages. The realisation that working with these animals in the field is not the cakewalk I imagined has been the biggest eye opener. I'm still a little shaky on id’ing the little blighters, and I have been amazed by the variation both among and within species caught at the bait traps.

Having survived this far I decided it was time to test my skills in the field and last Sunday I went on my first field trip to collect wild females from the first population on the list. The objective was simple: collect as many D.serrata females as possible. The population was a small village called Red Rock, which is 30km north of Coffs Harbour. It is a beautiful place on the coast, right next to a national park, with an array of novel animal and plant species (we saw a ray from the bank of the estuary on the first evening). After a 5 hour drive down, I put the traps out on the Sunday evening, in shorts and t-shirt, bothered only by only a few mosquitoes and generally feeling quite pleased with myself. One of the down sides of working in Sweden was the short, frustrating field seasons. I looked forward to working on a species where they were found in the field for most of the year (it is a little cold for them over the winter) and can be worked on in the lab year round. I went to bed that night looking forward to my first day collecting, and as I dosed off to sleep I started to hear the tapping of rain on the window.  I woke several times that night; each time I could hear the hammering of rain against the window. By morning the place looked bleak and grey, rain continued to fall, and not your soft European rain. This continued for 2 days……in fact when we left the area it had seen around 100mm of rain in consecutive nights. Coffs harbour had been closed off, roads washed away and the place considered a natural disaster zone. 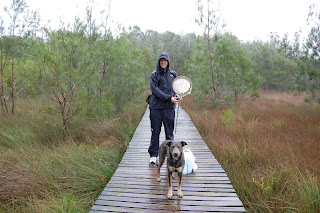 BUT, the Drosophila were still there, over 2 days of catching I managed to get the numbers I needed. They may not be as pretty as damselflies, but they are a little harder. The downside was that the rainy weather meant catching them sucked, as we had to fend off 100’s of mosquitoes and leaches (including the one in the picture, that I found after it had been munching on my belly) as we walked along the path that had quickly become a river.

The realisation that fieldwork on this species may be a little harder than I expected does not detract from the possibilities switching system has given me. Yes, there is a period when you have to learn the basics all over again, alone and forgotten, but in the long run this is a worthwhile exercise that should be embraced by all those who get the chance.