When Biologists move to the dark side: working hand in hand with physicists to understand the role of color in the evolution of species

Did you know that species can be measured as aerosols? Using lasers and dark field spectroscopy for remote classification of animals.

To improve the temporal and spatial resolution of insect movement, we started to think about novel ways to use species color information to track individual movement and interactions. At one of our meetings, the Physicists suggested to use LIDAR technologies and dark field spectroscopy to track the movement of individual damselflies as they had discovered that they could be treated just like large bio-aerosols. Laser radar or LIDAR stands for Light Detection And Ranging and is typically used to remotely measure the size distributions and composition of aerosols in the atmosphere. Recently, fluorescence LIDARs were developed  for the detection of biological aerosols in relation to bio-warfare such as anthrax, but they are slowly getting discovered by other scientists and are starting  to be applied outside this area. In this context, it should be noted that Radar technology is  of limited in insect detection because the small size of insects means that they are often too small to be detected by the Radar-wavelengths and hence no discrimination can be provided. , LIDARs, on the other hand, have the capability to capture fine scale temporal and spatial insect movements, as well as capture multiple color/polarisation details. Due to these characteristics, LIDARs can capture multiple movements in time and space and classify flying aerosol particles (e.g. insects) into discrete groups (e.g. species and sexes). We have shown these applications of LIDAR technologies in field feasibility studies here (Brydegaard, Guan et al. 2009), here (Guan, Brydegaard et al. 2010) and here (Brydegaard, Lundin et al. 2010). 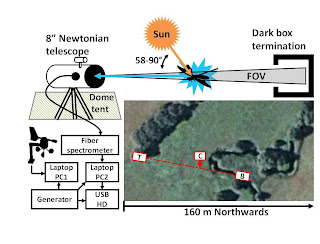 Figure from (Runemark, Wellenreuther et al. 2012). Setup of the experiment. T: Newtonian telescope. C: Calibration site, B: Dark box termination. Light is collected by a 1mm UV fiber in the focal plane of the telescope and fed to a compact spectrometer. Distance from telescope to termination was 95 m of which the first 55 m cover grassland and the remaining 40 m cover the river Klingavälsån in Skåne, Sweden.

In addition to the use of LIDARs, it is also possible to use sunlight-based passive sensing methods to study flying insects. One passive sensing method, which is more economic and thus might be of interest to research groups with little funding, makes the use of sunlight and uses the back-scattering of animals (reflexes) that intersect the field of view. This method is called dark field spectroscopy (see e.g. http://ieeexplore.ieee.org/stamp/stamp.jsp?arnumber=06134630). By analyzing the spectral signature (color) of the reflex, one can classify insects to species level and even separate sexes (if they differ in color). By applying this method, we could determine the sex of each damselfly individual that intersected the field of view, and this allowed us to study, for instance, sex specific activity patterns in relation to temperature and wind speed (Runemark, Wellenreuther et al. 2012). This setup also has the advantage of capturing interactions that occur at fast temporal scales, which, in contrast, are impossible to capture with the human eye. Just think of individual damselflies chasing each other above the river surface. In such a situation, where many damselflies belonging to different species and sexes interact in a dynamic interplay, the human eyes are not capable to capture the temporal and spatial resolution of such species interactions. The passive sensing setup, however, allowed us to study both pre-copula mating interactions between a male and female crossing the river (a female crosses the telescopes field of view approximately 0.1 seconds after a male) and males chasing after females (a male crosses the telescopes field of view approximately 1 second after a female). 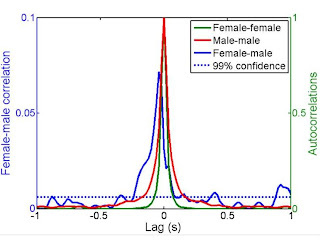 Figure from (Runemark, Wellenreuther et al. 2012). Interactions between Calopteryx males and females. Note that there is a high blue peak just to the left of zero, indicating that it is quite common that males appear very shortly before females. This is most likely due to precopulas crossing the river. Approximately one second after a female has passed, there is a higher probability of a male passing too, probably males chasing the female. As expected this peak is less well-defined as the variation in distance is larger for chasing males than for precopulas.

Another interesting application of electro optical systems is the study of nocturnal migration in birds. Traditionally, nocturnal bird migration has been studied using RADARs, thermal cameras or moon watching. LIDAR systems, however, can significantly improve on those methods because LIDARs capture information about the color and plumage microstructure of migrating species. With this color information, it is then possible to classify some of the birds to the species level, as it is shown in the Figure below. 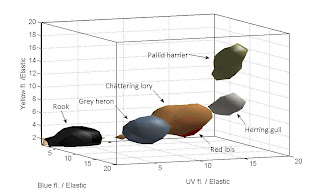 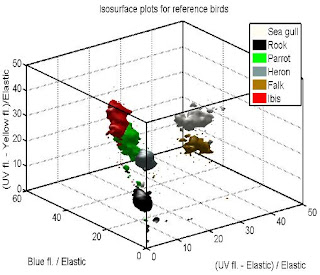 Lessons learned: What we as Biologists have learned from working with physicists

Color is of utmost importance in many animal systems, and it is therefore clear that many biologists wish to study and quantify color. The first step when doing so is to realize that this is not a trivial undertaking, and that we all need to first take a step back and carefully think about what we really want to do. Think of the photons as living beings, where are they born? Where do they go, what do they do and how do they change before their death when your detect them? What part of the animal do we want to study, what spatial and temporal resolution do we want, which animal is the receiver of the color signal and so on.

Where from now? Future perspectives

Some of the applications described in this blog post have implications for the study of vector-borne diseases, the study of pollination, quantification of habitat availability for conservation issues, presence/absence of agricultural pests, and the study of predator prey interactions. We are collaborating with a Pan-African spectroscopy network, and in September, we will hold a workshop on realistic remote sensing methods for entomology. The aim is to remotely determine the flight direction, blood meal sizes and individual age of insects. We are looking for new biological questions that these spectroscopy groups, which are dispersed over 6 African countries, could address using setups that are similar to that described above (Runemark, Wellenreuther et al. 2012). We, therefore, greatly welcome comments and ideas in response to this blog post. The member countries are from east Kenya, Ghana, Burkina Faso, Mali, Ivory Coast and Senegal. If you wish to collaborate with any of the research groups, please contact Mikkel.Brydegaard@fysik.lth.se.

Some basic advice for biologists that would like to measure color