The majority of what is known about patterns and processes of speciation derives from studies on terrestrial and freshwater species, which usually inhabit environments that are geographically heterogeneous. This heterogeneity might account for the importance that some scientists attribute to allopatric speciation in general. Marine organisms, on the other hand, are normally found in environments where geographic barriers and environmental structure are less, and where dispersal is often large. For these reasons, the mechanisms that drive speciation in terrestrial and freshwater taxa may be different from those that act in marine species, and the patterns of speciation may be significantly different. On Friday the 23 of September (1-2pm), Kendall Clements from the University of Auckland, New Zealand, is going to give a talk about parrotfishes and drummers in the context of adaptive radiations, where he is going to argue that ecological speciation has not received enough attention in a marine setting. 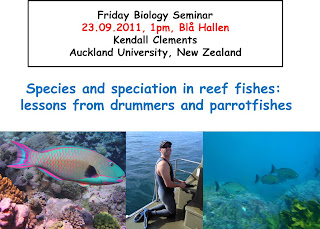 We will have a lab meeting on Thursday the 22 of September, starting at 1pm, to discuss these topics with Kendall. We will read two papers that are both relevant to marine speciation. The first one is the paper by Streelman and Danley (2003), which considers ecological divergence and sexual selection as progressive stages in vertebrate adaptive radiations. The second paper that is interesting in the context of marine speciation is the Van Doorn et al. (2009) paper, which examines the relationship between ecological speciation and sexual selection in a modeling context.

I will bring FIKA and make sure that we have coffee, since Kendall will be jetlagged.

Hope to see you all there, Maren
Written by Unknown kl. 12:59 AM