Some of you might have heard about Sweden's southernmost adder population in Smygehuk and the spectacular rescue action in the 90s that even made it into Nature. The man behind the story, Thomas Madsen from Deakin University, AU, is currently visiting Sweden to continue his work on this snake population (they are still going strong!).
Before he disappears back to Australia again, he'll give a seminar at our EXEB meeting on Tuesday, April 18th. While his research interest has recently branched out to cancer in the Tasmanian devil (see e.g. here and here), he'll tell us about predator-prey dynamics between snakes and rats!

Floods and famine: climate-induced collapse of a tropical predator-prey community 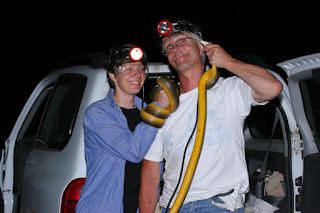 Summary
1.     Will climate change threaten wildlife populations by gradual shifts in mean conditions, or by increased frequency of extreme weather events?
2.     Based on long-term data (from 1991 to 2014), the aim of the present study was to analyze and compare the sensitivity of predator-prey demography to extreme climatic events versus normal, albeit highly variable, annual deviations in climatic conditions in the Australian wet-dry tropics.
3.     From 1991 to 2005, predators (water pythons, Liasis fuscus) and their main prey (dusky rats, Rattus colletti) showed significant climate-driven fluctuations in numbers.
4.     These fluctuations were, however, trivial compared to the impact of two massive but brief deluges in 2007 and 2011, which virtually eliminated the dusky rats.  The two floods resulted in the pythons experiencing an unprecedented famine in 7 out of the last 8 years causing a massive shift in python demography i.e. a significant reduction in feeding rates, reproductive output, growth rates, relative body mass, survival, mean body length and numbers (from 3173 in 1992 to 96 in 2013).
5.     Our results demonstrate that attempts to predict faunal responses to climate change, even if based on long-term studies, may be doomed to failure.  Consequently, biologists may need to confront the uncomfortable truth that increased frequency of brief unpredictable bouts of extreme weather can influence populations far more than gradual deviations in mean climatic conditions.

There will be fika!