Dear all,
sorry for the late posting. At next week's EXEB lab meeting we will dive into the world of seaweed flies and discuss a recent paper by Edward and Gilburn on the interaction of sexual selection and viability selection on the maintenance of a large chromosomal inversion polymorphism. Hanna Rosenquist will present the paper. 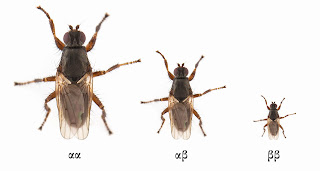